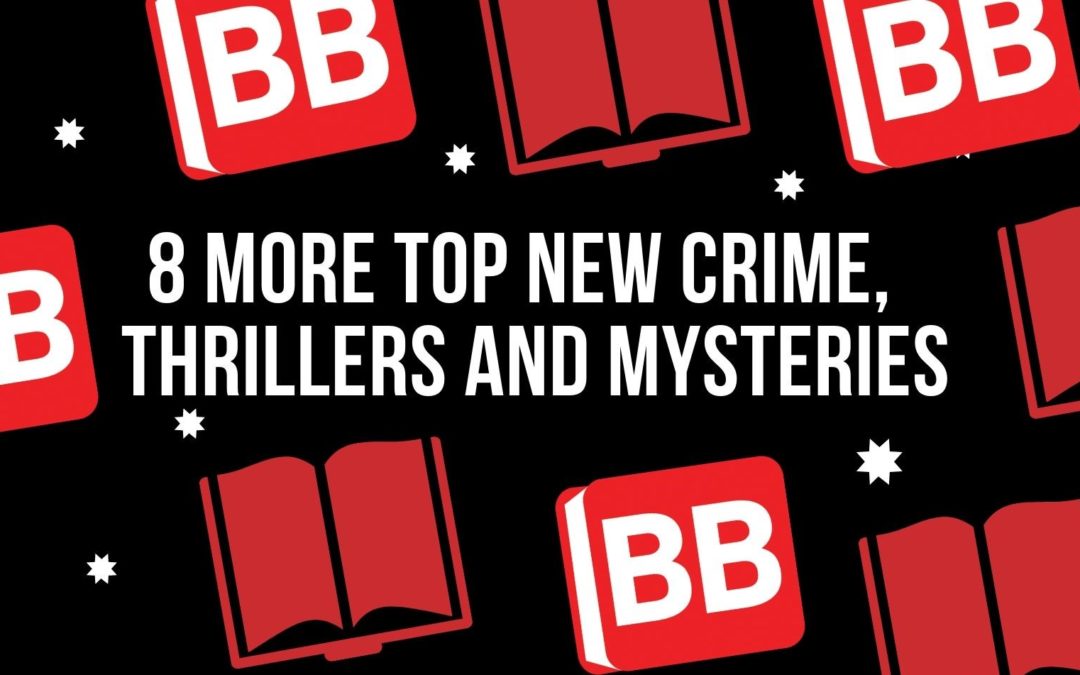 For all you crime and mystery fans out there, here are 8 more of the most gripping, atmospheric and satisfying reads to have recently come into stock. They’re all recent, notable titles that you’ll easily find on your next visit. Be sure to have a look through them and pick up the ones you fancy as soon as you can.

The Holdout by Graham Moore 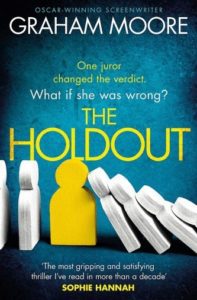 Comparisons to 12 Angry Men are already being made. And that’s probably because the most satisfying crime and mystery stories out there tend to revolve around the incalculable difference that the thoughts and feelings of one ordinary person can make to fate and justice. The Holdout is also being called the equal of classic legal thrillers like A Time to Kill by John Grisham… so you know you’re in for something good with this one.

Maya Seale was once on a jury. The case that she and her fellow jurors were hearing was that of Jessica Silver — fifteen year old heiress to a billion dollar fortune — and Bobby Nock, her teacher and prime suspect in her disappearance. The prosecution was confident, and a fairly straightforward conviction was all everybody expected. Everybody, that is, except for Maya, whose intuition was strong enough to convince the rest of the jury to vote not guilty.

Ten years down the line, one of the jurors on that fateful case is found dead and all evidence points to Maya as the culprit. But there were ten other people on that jury and Maya can’t shake the idea that she is being punished all these years later for that one decision. Who was guilty then, and who’s guilty now?

The Broken Ones by Ren Richards 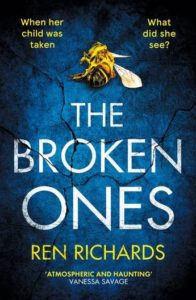 If you like your crime haunting, dark and enthralling twisted, Ren Richards’ intriguing and emotional examination of motherhood gone wrong should be added to your list straight away.

As a true crime writer, Nell Way is no stranger to the disturbing and painful stories of others. But the most painful one she knows is also the one that she will never tell… her own. Nell has changed her name and completely re-forged herself in the ten years since she was a mother. There’s no real preparation for it and, as a teenaged mother with a daughter that she never really learned to love, Nell’s motherhood was impossibly difficult. But then, when her little girl disappeared, that life was over… though she has never been able to escape suspicion.

Now she’s interviewing a woman who murdered her own twin and that’s not even the most disturbing thing. Through these interviews it becomes clear that someone knows who Nell really is, and knows too, that she has never been honest about the events of the day her daughter disappeared.

The Broken Ones is as disturbing and dramatic as psychological thrillers come. 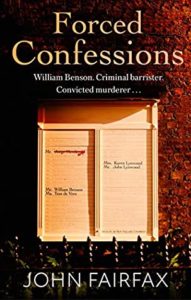 It’s been sixteen hard years since William Benson was convicted of murder, but in that time he has defied all expectation, and overcome alienation and contempt in order to open up his own Chambers and become a practising barrister. With the help of a few loyal friends, he has left his life in prison behind. He now faces his most challenging case yet.

A Spanish doctor, Jorge Menderez, is found dead in a warehouse. It is quickly ascertained that Menderez was seeing a counsellor to help get a handle on his troubles. Though nobody knows much about him, or how he came to be where he was found, that counsellor’s husband is accused of the murder and it’s up to Benson to defend him, even as his own past heaves into view.

Compellingly drawn characters and highly thoughtful plotting, Forced Confessions is a good fit for anyone who wants their thrillers to leave them with something substantial to think about.

Dead to Her by Sarah Pinborough 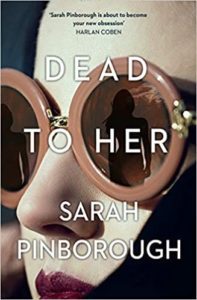 This one’s a steamy and twisting psychological thriller perfect for fans of Liane Moriarty and Lisa Jewell; secrets, betrayals, infidelities, lies and revenges abound. Top notch entertainment wrapped in a sexy package that will keep you reeling with its many surprises.

“Once a cheat, always a cheat,” they say. Marcie Maddox has worked hard to get where she is after the illicit affair that started her new life a few years ago. But her world of country clubs, yachts and sumptuous houses in Savannah, Georgia, isn’t easy to maintain, no matter how hard she tries. Nor is keeping her husband, Jason, truly interested.

So, when Jason’s boss brings home a hot new wife from his trip to London, the young Mrs William Radford IV isn’t quite the souvenir everyone expected. Sexy, drop-dead gorgeous and black—Keisha quickly usurps Marcie’s place as the beautiful second wife. But when Marcie sees the extra spark in the room when Keisha and Jason are together and their obvious, magnetic attraction, the gloves come off. 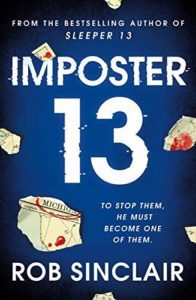 The finale to the best-selling Sleeper 13 series — which, in case you’re unfamiliar, is perfect for those who enjoyed the Orphan X series — sees Aydin Torkal venture into the nest of international terrorists as part of his quest to overcome his tragic upbringing and loosen the death grip of hatred and violence.

Aydin thought that he had at last broken free from his life as an insurgent but now he must once again convince the most dangerous terrorists in the world that he is one of them in order to prevent global catastrophe. He’s alone in this, and succeeding will mean not only surviving potentially fatal suspicions, but the reopening of his deepest wounds.

Hold-your-breath deceptions, ingenious plotting, tons of action and a good helping of internal friction, Imposter 13 is a terrific work of suspense.

The Man on the Street by Trevor Wood 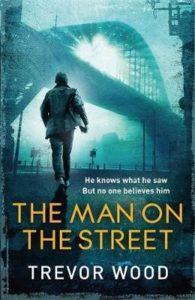 If you’ve already devoured everything by Ian Rankin and Robert Galbraith that you can find, then here’s one that you’ll be wanting to give a go.

Crime thriller heroes are not often as compelling and original as is Jimmy. Jimmy is a homeless war veteran struggling with PTSD and just trying to survive on the streets. He has no authority, no allies and no legal heft… and yet he is not content to stand by and do nothing. When, one night, he hears a heavy splash following the heated argument of two men on the riverbank, he tries to ignore it. He has greater concerns than someone else’s fight. But then he sees a newspaper article about a girl named Carrie pleading for information concerning her missing father and he decides that, at the very least, he can tell her what he heard that night. The Police aren’t interested, but Jimmy has agreed to help Carrie even if that means dredging up his past and the enemies that he has left behind.

Very authentic and very gritty, The Man on the Street is a crime thriller that boasts not only one of the most unique and root-for-able protagonists in the genre, it also manages to inject an unusual amount of heart and humanity into its tightly-wrought and intricate tensions.

Stop at Nothing by Michael Ledwidge 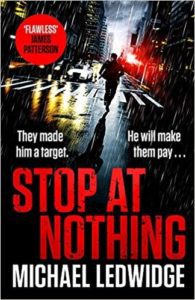 One that will sit comfortably up there with your favourites from James Patterson, Lee Child and Gregg Hurwitz, is a wild ride of relentless action and deadly adventure.

When a private jet crashes into the Caribbean sea, diving instructor Michael Gannon is the only person on the scene. Finding six dead men and a suitcase full of cash and diamonds, Gannon assumes he’s the beneficiary of a drug deal gone wrong.

However, it seems one of the passengers was the Director of the FBI – despite the official story that he died of natural causes in Italy. Suddenly pursued by a shadowy cabal of the world’s most powerful and dangerous men, Gannon will only survive if he unravels a terrifying conspiracy.

But those determined to kill him will learn that Gannon’s past holds its own deadly secrets…and the hunters soon become the prey. 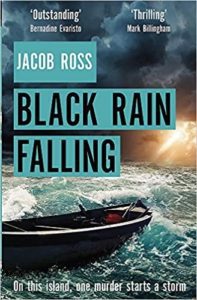 Noted as much for its realistic brutality and focus on real social issues as for its freshness and originality, Black Rain Falling is one of those rare thrillers that receives praise for what lies beneath the typical thrills of the genre.

“On the Caribbean island of Camaho, forensics expert Michael ‘Digger’ Digson is in deep trouble.

His fellow CID detective Miss Stanislaus kills a man in self-defence – their superiors believe it was murder, and Digger given just six weeks to prove his friend is innocent.

While the authorities bear down on them, Digger and Miss Stanislaus investigate a shocking roadside murder, the first tremors of a storm of crime and corruption that will break over Camaho at any moment.”

Family, class, fear and loyalty are at the heart of this compelling drama.