A Selection of this Month’s Popular Non-Fiction Reads From tales of organised crime and druglords to the state of our planet, from rugby triumphs to one of SA’s brightest hip-hop stars, here is a selection of some recent non-fiction releases with which you’ll want to augment your already diverse set of interests. 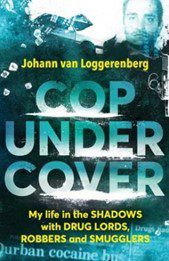 To anybody who has cast even a cursory glance over the state of South Africa’s darker activities in the last several years, the name Johann van Loggerenberg will be far from unfamiliar. As a commentator on and a chronicler of organised commercial crime, his has been a notable voice for some time. Having worked as an undercover police officer into the late 90’s, van Loggerenberg spent a good while working as a SARS tax and customs enforcement investigator, a position that garnered him considerable expertise in the field. Following his last three books – Rogue (2016), Death and Taxes (2017) and Tobacco Wars (2019) – SA’s greatest tax sleuth is back with another hard-hitting descent into the criminal underworld… and is telling his own story.

In Cop Under Cover, Van Loggerenberg describes his life with killers, drug lords and corrupt officials in vivid detail. This portrait of the criminal underworld also reveals the price he had to pay to lead a double life and how the struggle between the old and the new guard in the police continued for many years into the new democracy. 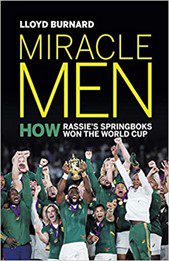 The Springboks’ victory at the 2019 World Cup was, of course, a glorious moment. It was, however, a triumph made all the more historic as it involved the game-changing efforts of two men in particular: Coach Rassie Erasmus and captain Siya Kolisi.

Before 2019, the last time that South Africa had won the world cup was back in 2007 – a year in which racial inequality was a fair deal worse than it is today (though the issue still persists). For that win, the Springboks’ match-day squad  included just two non-white players. Last year, there were five black Africans in the starting line-up.

Told by sports writer Lloyd Burnard, Miracle Men is the triumphal before-and-after  story of the special relationship that transformed the SA national rugby team and made history.  It’s also a thrilling tale of obstacles overcome and catastrophes narrowly avoided.

A Life on Our Planet: My Witness Statement and a Vision for Our Future – David Attenborough 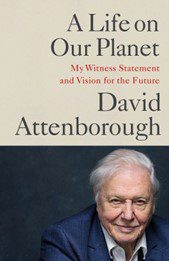 “See the world. Then make it better.”

David Attenborough – quite possibly the most recognisable naturalist of our age, and certainly one of the most indefatigable – has had an extraordinary career. He’s 93 now, and throughout his incredible journey he has charted, campaigned against, observed and advocated for a wide variety of changes to our planet and the life it supports.

Much of Attenborough’s recent work has concerned the terrible, indefensible mess we have made of our world – and how there is still time to correct it, if we act fast. A Life on Our Planet continues this work with an impassioned account of all that he has witnessed and his vision for a future in which we have learned from our errors and restored our incomparable home to its proper glory.

This book is a call to action, a disturbing look at the damage we have wrought and an exceptional opportunity to learn exactly and fully why there is no time to lose. 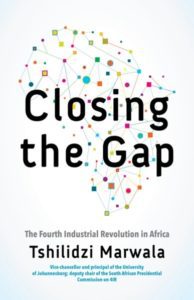 Tshilidzi Marwala is currently Vice Chancellor and Principal of the University of Johannesburg. He has extensive qualifications and experience in engineering and in computer science.

The Fourth Industrial Revolution concerns and fosters the instituting of so called “smart factories”, and foresees many different kinds of integrated AI and cyber-technology. These developments have the potential to radically alter the South African economy and bring about significant changes across the continent.

In Closing the Gap, Marwala outlines the part played by South Africa in every previous industrial revolution and explains how AI may be used to further develop numerous industries in South Africa including banking, mining and medicine. It’s an accessible and highly informative guide to new and emerging technologies in Africa, an exploration of previous challenges and successes, and a forecast of the obstacles to come. 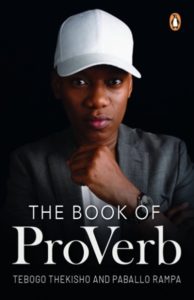 Tebogo Thekisho, better known as ProVerb, first caught South Africa’s attention in 2005 with the release of his now classic debut hip-hop album, The Book of ProVerb. As a teenager he sought music wherever he could find it, and recorded his first demo at age 15, using his mom’s hi-fi. From there, he hustled his way into a multifaceted, award-winning media career in music, radio and TV, crafting a reputation on platforms such as Channel O, Jam Alley and YFM. For over a decade he has been a regular on TV screens as the host of Idols South Africa.

In this memoir, Tebogo pays tribute to the people who’ve helped make him the person he is, especially his parents, his grandmother and his siblings. He shares the lessons he’s learnt through the different phases of his life with infectious positivity, but also gets frank about the dark times he’s endured, including his painfully public divorce and attempted suicide. The Book of ProVerb  is a memoir, a hustle manifesto, and a wholesome guide to life from one of South Africa’s brightest stars. 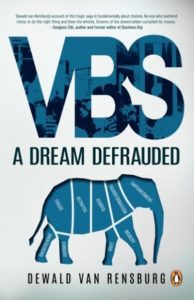 VBS Mutual Bank was presented itself as one of the foremost champions for black advancement. Originally known as the Venda Building Society, it began as a small money lender in Limpopo. It was not especially well known until it offered Jacob Zuma a dubious and substantial home loan which would be used to pay for improvements to his Nkandla estate. It’s parent company, Veli Investments, was all set to become a serious contender in the financial markets. And then the whole thing came crashing down.

When the bank suddenly went into curatorship, it was assumed to be the result of some unfortunate corporate error. In fact, it was the result of an epic fraud.

VBS: A Dream Defrauded  unravels the fraud, exploring how suspected mastermind Tshifhiwa Matodzi and his associates first took control of VBS, fed ANC patronage networks and operated under a nationalist mantle endorsed by Venda royalty. Written by one of the journalists who first broke the story, this book draws on interviews with VBS insiders and other role-players, as well as documents and detailed forensic evidence collected in the course of two years of investigations. This is a compelling account of a bank heist whose shockwaves continue to haunt the politicians, businessmen and traditional leaders who enabled it.