Books for Superfans of the Harry Potter World 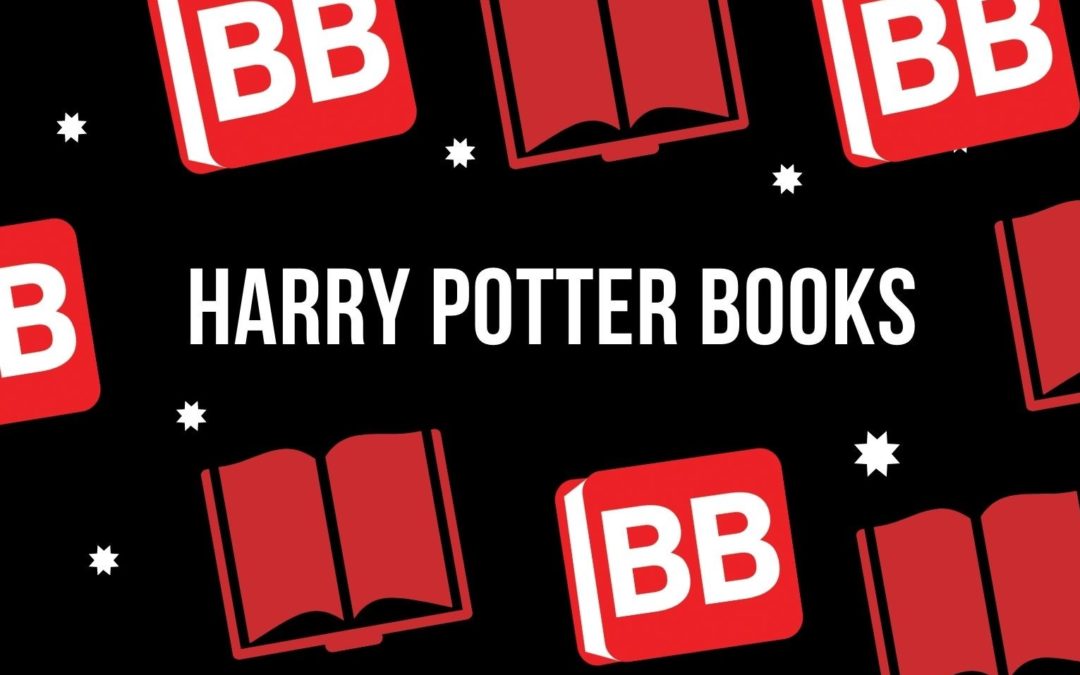 As with so many sensational, prodigiously adapted series, there’s more or less no reader, movie-goer, quiz-taker or smart phone owner that needs an introduction to the world of the Harry Potter Books. Its inception and meteoric rise to literary and cinematic stardom is the stuff of legend – as are the controversies and debates that it has spawned – and its lingering impact on popular culture is so well cemented that even those who have no more than a passing acquaintance with the characters might find themselves suddenly wondering which Hogwarts house the chap at the end of the supermarket aisle might be sorted into.

Another thing that the world of Hogwarts has managed to inspire is a wealth of exquisite illustration, innovative publishing and oodles of stuff to read and explore after you’ve finished the main novels. Here, without saying a word about Rowling and her recent social missteps, we’ll be focusing on some of the wonderful books that we at Bargain Books have in stock, for when you fancy a plunge into the magical, but you’ve already made it all the way from The Philosopher’s Stone to the end of The Deathly Hallows.

But first… a modest handful of intriguing facts about the series, just to whet the appetite: 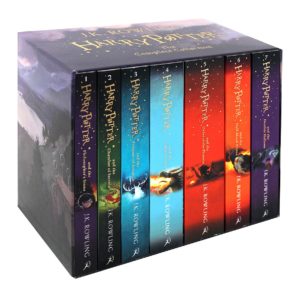 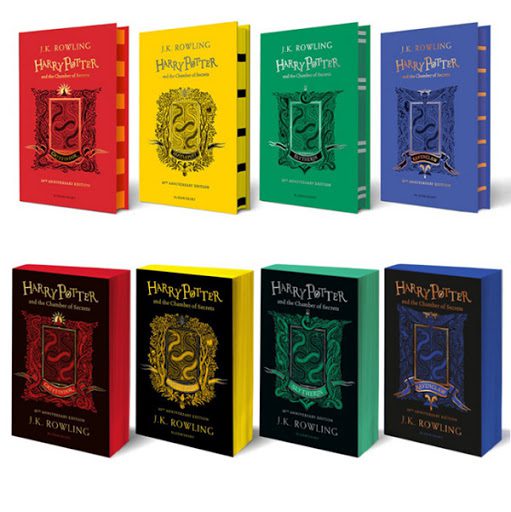 As mentioned above, the issue of to which House you, and everybody you know, might belong, is one of those cultural questions that has managed to bleed into many other areas. And, of course, the Harry Potter books are also available in editions specifically tailored to your house. Celebrate your particular traits with these themed editions. Wondering exactly what those traits are? Well: 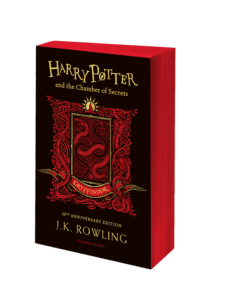 Published to commemorate the 20th anniversary (yes, 20th, which was actually last year) of its original publication, this beautiful new edition of The Chamber of Secrets is just the thing for fans and newcomers who know in their hearts that Harry, Ron and Hermione would have been their housemates.

But not to worry, if you reckon that the sorting hat would have come to a different conclusion, there is also a unique edition for those of us destined to belong in Slytherin, Hufflepuff or Ravenclaw.

Incorporating bonus features specific to each house, each of these editions is also available in a gorgeous hardback format decked out in the vibrant livery of your chosen house. And, if you’re a proper, serious collector, you’ll be pleased to know that every book of the series will be receiving the same treatment so that your bookshelves can proudly display the same house-loyalty as you do.

As yet, the books have been given the house treatment up to The Goblet of Fire. Bargain Books has good stock of many of them, and we can get hold of whichever you ask for if your nearest branch doesn’t have it.

Harry Potter: A Journey Through a History of Magic 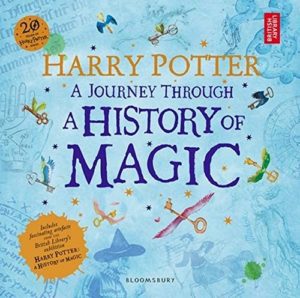 Even with a whole series of books and movies, several offshoots and accompanying stories, there is still more about the Harry Potter world of magic for us to learn. For those of us who wonder about the full extent of the Hogwarts curriculum, from Herbology and Divination to Defence Against the Dark Arts and Transfiguration, how the Philosopher’s Stone was created, what the witches and wizards of the past looked like, and all the other things about which we wonder, there is this gorgeous guide.

It’s packed full of original manuscript pages, unseen sketches, important artefacts and illustrations by Jim Kay – who, you might know, is responsible for the incredible Illustrated Editions of Harry Potter which are also available (you are very much encouraged to have a look at his utterly incredible work Here).

A Pop-Up Guide to Hogwarts 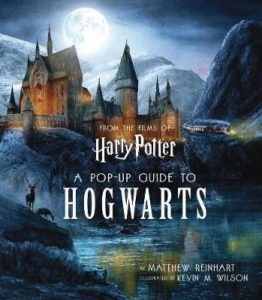 If you have any friends who aren’t thoroughly captivated by a good pop-up book, it’s time to have a stern word with them. It’s also time to show them this, which is as enchanting as pop-ups come.

Take a spectacular, interactive tour of the world’s most famous magic school with this beautiful pop-up guide to the key locations in and around Hogwarts. A must-have collectible, this guide includes text insights into the school as seen in the films and brings to life favourite locales from the Quidditch Pitch to the Forbidden Forest and beyond. Filled with luxurious artwork and extraordinary craftsmanship, this is truly a 3D masterpiece celebrating all things Harry Potter.

The Marauder’s Map Guide to Hogwarts 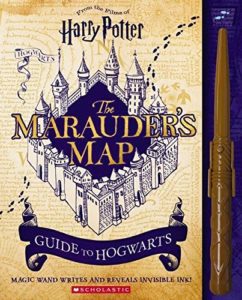 “I solemnly swear that I am up to no good.”

Though, of course, it has much competition, the Marauder’s Map is one of the most famous magical objects at Hogwarts – and it had a good hand in informing and refining the Hogwarts aesthetic.

Now you can explore the famous school of witchcraft and wizardry in the company of Messrs Moony, Wormtail, Padfoot and Prongs, discovering secrets and, of course, managing mischief along the way.

“For the first time, readers can relive all the movie magic of the Harry Potter series with this beautiful guidebook to the secrets of Hogwarts, complete with four foldout pages containing portions of the map.

When fans are finished poring over the text, they can open up the wand, which doubles as an invisible ink marker and light. The light reveals invisible ink secrets on the foldout Marauder’s Map pages, while the pen can help readers create their own magical map, using the blank parchment included at the back of this book.” 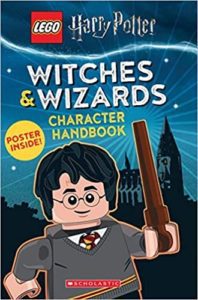 Even die-hard fans of the HP world can’t help but admit that there is a certain charm in the LEGO variants.

“Welcome to the magical world of LEGO(R) Harry Potter! Learn about all your favorite characters, from Hogwarts heroes like Hermione Granger and Ron Weasley to world-famous wizards like Albus Dumbledore and Sirius Black!

Who has a magical eye that can see through ANYTHING? Which Hogwarts professor can transform into a cat? Find out those answers and more here!

Every page of this character handbook is packed with fun facts and epic moments from the films. There’s even an exclusive poster inside!”

For younger readers, this might be just the thing to ease them into the books proper.

Honeydukes: A Scratch and Sniff Adventure 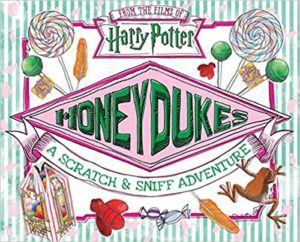 Don’t tell us you’ve never wondered what all those magical confections must taste like. From the moment students mention the likes of Chocolate Frogs, Peppermint Toads and Black Pepper Imps, we knew that the sweets in the HP world would be just as memorable as the rest of it.

Also, the founder of Honeydukes wizarding sweets shop was named Ambrosius Flume… which is enough to make you want to know more about it, isn’t it?

“Now for the first time, fans can scratch and savor the scents of delectable confections straight from the shelves of Honeydukes! Look back on the most mouthwatering Harry Potter movie moments in this beautiful, scented hardcover, perfect for fans of all ages.”

These are just a few of the Harry Potter themed books and gifts available at Bargain Books. You can also be sure that most of our branches are likely to contain at least one Potterhead bookseller, so be sure to pop down to your nearest to indulge your love of all things HP.