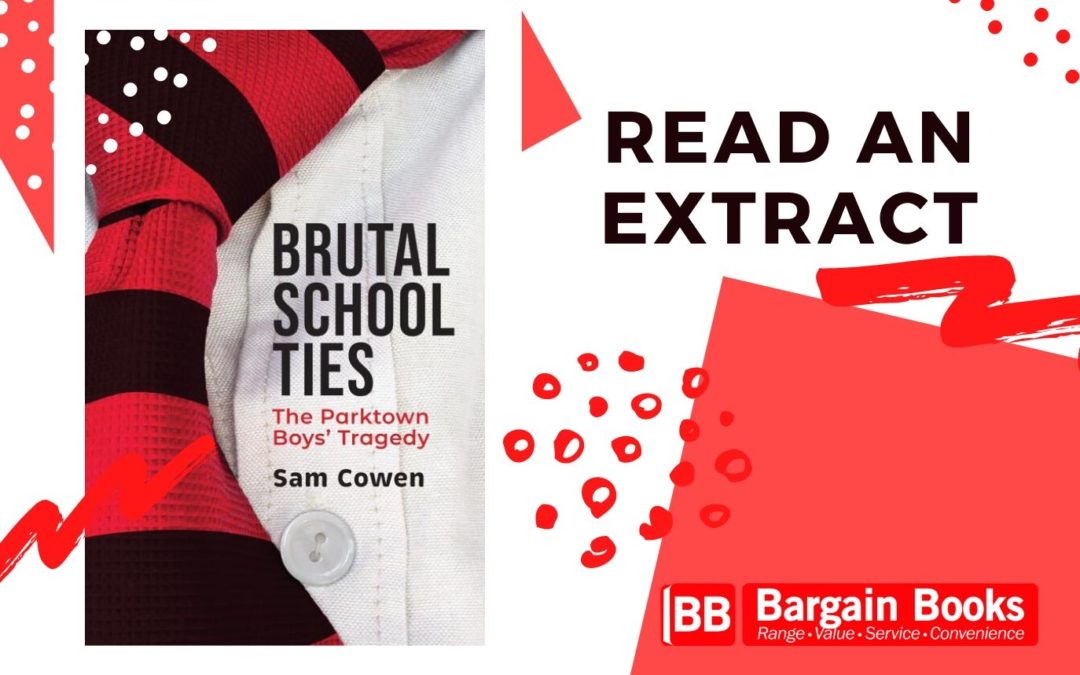 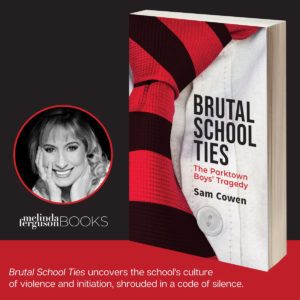 In September 2018, Collan Rex, the former water polo coach at Parktown Boys High School, found guilty of 144 charges of sexual assault and 14 of assault, was sentenced to 23 years in prison. It was one year longer than he’d been alive. The story made front page headlines. Rex was a young, good-looking sports coach at a highly regarded boys’ school, with over 100 years of history. He had molested, assaulted and choked a boarding house full of school boys into silence and shame. He left behind a vacuum of devastation. His response in court ? It had been done to him, in the same way, at the same school.

Brutal School Ties uncovers the school’s culture of violence and initiation, shrouded in a code of silence. It follows the trail of broken lives  –  the victims, the parents, the teachers, the matron, the house master who killed himself.  And Collan Rex, the abuser. For the first time, they will break that code, so that the ties that bind us do not have to gag us.

Read an extract below:

It was a summer evening in early November 2016 and, as is common in Johannesburg at that time of the year, a thunderstorm was brewing. At Druce Hall, the hostel at Parktown Boys’ High School, boys were milling around in the dining room, in the quad, and in the television and couch areas. It was a normal Thursday evening, the last night of boarding in the school week. By this time the next day, most of these boys would be watching TV or playing soccer in the garden of their own homes. Sixteen-year-old boarder, *Jonah, was worried. He had spotted his mother’s car in the parking lot, but he hadn’t yet seen her. His mind raced. Was he in trouble? Was there something wrong? She hadn’t called ahead to say she was coming, and now he was anxious. Collan Rex, one of the housemasters, stepped outside to stand beside Jonah. Although he was the master in charge of welfare and special events for the hostel, he was young and fun and relatable. He saw himself as more of a friend to the boys than an elder, and they felt much the same about him. He was the guy who inevitably turned a blind eye when they were fooling around instead of knuckling down to their homework during prep time. He was also Jonah’s waterpolo coach and they got on really well. “You okay?” Collan asked. Jonah wasn’t. “My mom’s car is here and she’s in with the Bosserts.” Mariolette and Chris Bossert ran the boarding house, he as director and she in the role of matron. Unofficially, she was also the house mom, there for sickness, hot chocolate and sympathy when necessary. The boys adored her. “Want me to go and ask what’s going on?” Collan asked. “I’m sure it’s nothing, but I can check for you if you want?”

Jonah nodded. Collan made his way down to the Bosserts’ house. He knocked on the door and Mariolette appeared. The two spoke briefly and he returned to where Jonah was anxiously standing. “She says it’s fine – they’re just having a meeting,” he said reassuringly. Jonah relaxed. “It’s probably nothing,” Collan said as he headed back into the hostel. It was far from nothing. Earlier in the evening, the Bosserts had been paid a visit by 16-yearold *Ben. Ben had a problem. He was looking for a bag of waterpolo caps that had been AWOL since Saturday. The team had played a match at the Afrikaanse Hoër Seunskool, affectionately known as ‘Affies’, and the following day the boys discovered that the waterpolo caps were missing. Ben was sure they had been in the common area at Foundation House when the team returned, but now they were nowhere to be found. The head waterpolo coach had instructed him to find them immediately. Ben suggested they watch the CCTV footage from the day, to see where the caps had gone. Chris Bossert had thus called it up on the big-screen TV in the lounge. He continued marking books, while his wife Mariolette cooked in the kitchen. The couple knew that watching that much footage was going to be really tedious, so they watched with only half an eye, confident that Ben was concentrating on it. Neither of them remembers now exactly how long the footage had been playing before Ben made a startled sound. Chris was the first to look up. What he saw on the big screen made his blood run cold. There were several boys in the room, sprawled across the couches, playing on their phones and chatting. On a long L-shaped sofa lay a boy, Jonah, in his underwear, his legs across Collan Rex’s lap, and Collan was pinching his nipples. Mariolette came running in from the kitchen. The three watched for a few minutes before Chris paused the tape and told Ben to go back to the boarding house and say nothing about this until they had spoken to the boy’s mother. “This is nothing,” said Ben. “He does this to all of us, all the time. And more.” Mariolette felt sick. This was the stuff of nightmares. After sending Ben back to the hostel, she called Jonah’s mother, Sharon, and requested that she come to the school immediately. Sharon was anxious –what could possibly be wrong? What could be so bad that they wouldn’t tell her over the phone? She soon found out.

A police van pulled up. Up in their rooms, two of the boys noticed several policemen making their way into the Bosserts’ house. No one knew why they were there. Upstairs, Collan himself was chatting to his roommate, entirely oblivious as to what was happening just metres away. The Bosserts showed the police the footage. Mariolette’s hands were trembling. It seemed to go on and on; further into the tape, other boys became involved, the nightmare never ending. The cops were horrified. “Come, let’s arrest this monster,” said Officer *Tabane. Collan was lying on his bed when the door opened and Chris Bossert came in, a strange look on his face. Collan knew instantly that something was wrong. “Pull some long pants on and get whatever you need … then come,” said Chris. On the way out, they spotted Mariolette. She was crying. “Wat het ek gedoen?” asked Collan. “You know exactly what you did,” she wept. Collan stood next to the police van, smoking, while Chris and the policeman remained inside, deciding what to do next. The two boys were still watching from the upstairs window. They should have been asleep hours ago – there was an exam to write in the morning – but they weren’t going to miss this for anything. Eventually, Collan climbed into the back of the van, the officers shut the door behind him and the police drove off. He didn’t know it, but this was the last time Collan Rex would ever see Parktown Boys’.