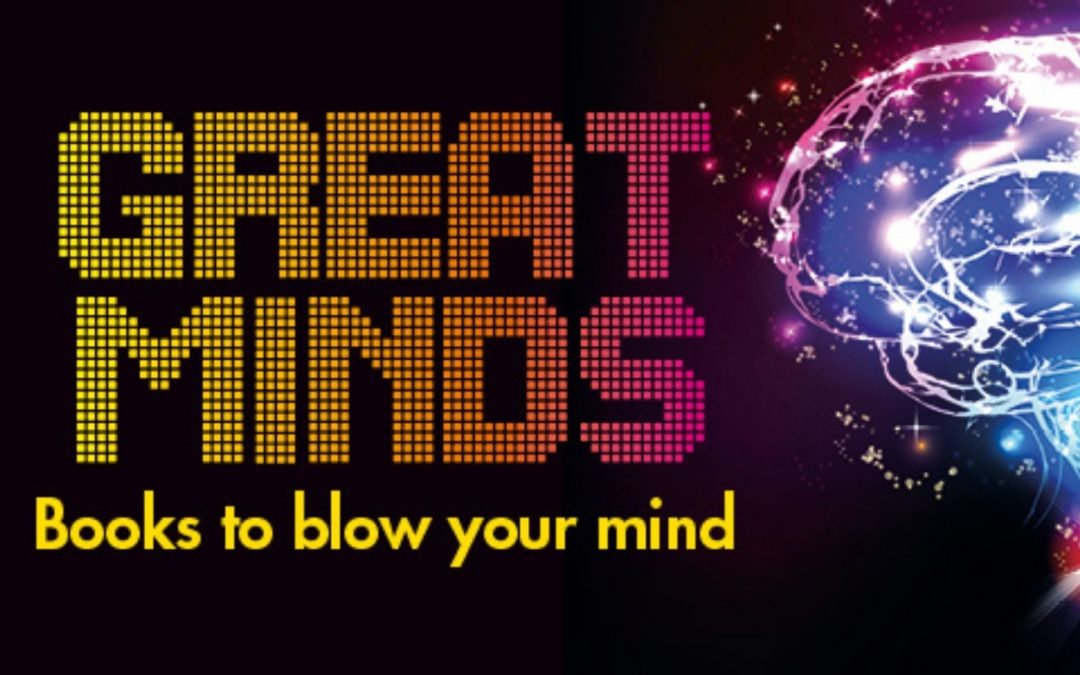 One of the things that remains comfortingly true about books is this: they’re inevitably the best and most accessible way in which to share in the wisdom and knowledge of the world’s greatest thinkers, experts and authorities. With these eleven books, which we’re championing this month for their powerful ability to deliver new perspectives and grant us greater insight, you’re tapping into a wealth of valuable and transformative experience.

Here’s a little about each of the mind blowing books we have chosen for you this month. 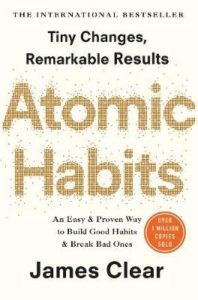 With this ground-breaking book, habits expert James Clear demonstrates that making massive change to your life really does begin with small decisions. Change is not one enormous shift by the compounded effects of many small ones. This practical and eminently useful treatise on the power of habit delves in psychology and neuroscience to reveal how a handful of tiny adjustments maintained over time can truly become something seismic, something transformative.

Throughout, Atomic Habits is sprinkled with the “inspiring stories of Olympic gold medalists, leading CEOs, and distinguished scientists who have used the science of tiny habits to stay productive, motivated, and happy.”

The Book of Joy by Desmond Tutu and The Dalai Lama 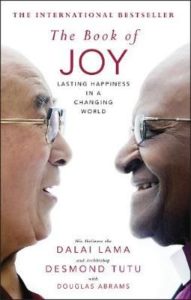 Desmond Tutu and the Dalai Lama are longtime friends. Not only this, they have shared a number of potentially crushing experiences including oppression, exile, violence and political and ideological upheaval. And yet they are both renowned as prominent proponents of humour, compassion and joy.

This book is the result of a trip that Tutu took to the Dalai Lama’s home on the Tibetan leader’s eightieth birthday. During this visit, the two of them maintained a lengthy and in depth conversation about just one thing: how to find joy in the face of suffering. Uplifting, incredibly optimistic and deeply affecting, The Book of Joy brings us practical advice and spiritual sustenance from two of the world’s most beloved figures. 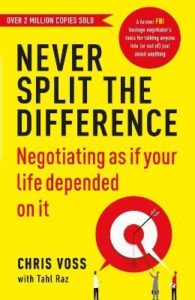 So much of life hinges on negotiation. There’s no denying that. Relationships, work, parenting and even everyday interactions contain a critical element of negotiation. FBI agent Chris Voss made his career as a kidnapping negotiator – a role that pitted him against the deadliest opponents out there, including gang leaders and terrorists, and had him grappling with the highest stakes one could imagine.

With this book, Voss imparts the principles that allowed him to remain cool, focused and effective in the face of overwhelming pressure. And these are techniques that will help us all to thrive in every aspect of our lives. Entertaining, widely applicable and completely engrossing, Never Split the Difference is just the thing to give you that competitive edge in any situation.

Women Who Run With The Wolves by Clarissa Pinkola Estes 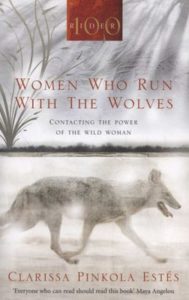 A feminist classic and as good an exploration of the female psyche as has ever been written, Women Who Run With the Wolves is a work of wisdom and love that explores the “wild woman” that resides within every woman and can be unleashed as a creative, generative force and harnessed as a tool for defying the male-imposed system that dismisses women’s emotions and drives and diminishes the value of female experience.

Using a combination of traditional, timeless stories and cutting-edge casework, Estes convincingly argues for the inclusion of primal, innate femininity in all aspects of life as a way to tap into a greater sense of direction and self-confidence.

The Power of Positive Thinking by Norman Vincent Peale 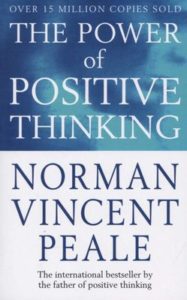 Another classic that has been transforming people’s lives for more than half a century, this is one of the most famous and enduring self-help books in existence – the book that spawned an entire subgenre of personal improvement.

The Power of Positive Thinking is a practical, direct-action application of spiritual techniques to overcome defeat and win confidence, success and joy. Norman Vincent Peale, the father of positive thinking and one of the most widely read inspirational writers of all time, shares his famous formula of faith and optimism which he developed himself by trial and error whilst searching for a way of life.

Millions of people have taken Peale’s teachings as their own simple and effective philosophy of living. His gentle guidance helps to eliminate defeatist attitudes, to know the power you possess and to make the best of your life. Now more than ever it is essential that we gain an idea of the place of our species within the greater context of the vast history of the world without us. Compared to the billions of years for which our planet has existed, our story is a short one, and yet we are managing to have an enormous influence on the place that spawned us.

Sapiens challenges what we think we know about being human. It explores what makes us so uniquely dangerous, so complex, so brilliant and so terrible by telling the story of how humanity got here and where we are going. 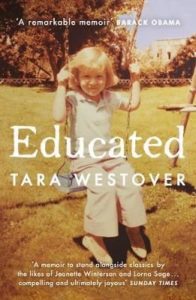 A heart-filled, insightful and stirring memoir dedicated to the pursuit of learning and knowledge against insuperable odds and outlandish circumstance.

Tara Westover grew up in rural Idaho. Her father radically espoused a vision of the End of Days replete with raining blood and a blackened sun while her brother grew ever more violent. She had no birth certificate and had never glimpsed the inside of a classroom.

It was not until she turned sixteen that Tara’s determination to re-invent herself through education led her to the conclusion that she needed to leave. Her path from the mountains of her childhood led her eventually to Harvard and Cambridge where she found not only the education that she sought but also the sense that in her quest she had travelled too far, broken too many ties. But by then, perhaps, it seemed to she might never get home. 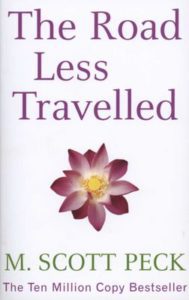 Here’s another real classic of personal improvement. This one has been around since the late 70s and has never stopped inspired and empowering people to overcome whatever challenges they might be facing.

Drawing on the experiences of his career as a psychiatrist, Scott Peck combines scientific and spiritual views to guide us through the difficult, painful times in life by showing us how to confront our problems through the key principles of discipline, love and grace.

Teaching us how to distinguish dependency from love, how to become a more sensitive parent and how to connect with your true self, this incredible book is the key to accepting and overcoming life’s challenges and achieving a higher level of self-understanding.

Talking To Strangers by Malcolm Gladwell 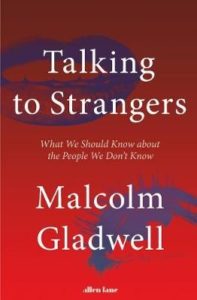 Talking to Strangers: What We Should Know About the People We Don’t Know, offers a typically thought-provoking look at how our interactions with strangers can go wildly awry, specifically focusing on those instances when misreading another person can have profound consequences. Being able to spot a liar is an essential skill – one that can see us safely through sticky situations and one that can significantly impact world events – and yet it’s not something at which we excel. In fact, it has been proved near-impossible time and time again. Not only that, but popular media seems hell-bent on the idea that instantly figuring somebody out based on the flimsiest clues is both easy and reliable… think recent Sherlock iterations, that show where the guy reads micro-expressions, and basically every detective show in existence.

But this isn’t actually a book about flexing your inner Holmes, or learning how to charm strangers, Talking to Strangers focuses most powerfully upon some of the most major scandals that have happened simply because belief trumped evidence.

The Choice by Edith Eger 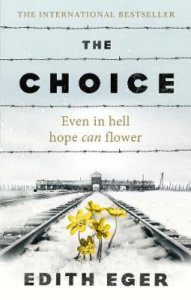 Therapist, renowned speaker and Auschwitz survivor Edith Eger delivers a highly philosophical memoir in which agonising experiences and unbearable cruelty are conquered by indomitable will: the will not to be the victim, the unflagging determination to look forward and embrace what is possible rather than what is not.

Today Dr. Egers’ patients include abuse survivors and soldiers suffering from PTSD. The Choice is her story.

During her imprisonment, Eger endured unfathomable torments – some even at the hands of Josef Mengele himself – but her spirit was such that not only did she survive, but her bravery was a beacon to those around her. Found barely alive when the camp was finally liberated, the young Edith returned to the world with unimaginable stories, but, more than that, she brought a light that so sorely needed sharing. Her story teaches that the human mind will so easily imprison itself if it is allowed to and that freedom is only possible when we choose to confront suffering instead of burying it.

An eternal message of hope and resilience, The Choice is a work of rare wisdom and compassion; a tale of survival and meaning that offers life-changing clarity. 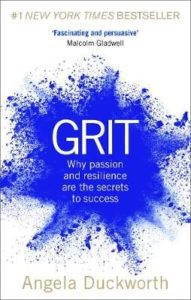 Psychologist Angela Duckworth was told as a child that she lacked “genius”. She resisted the idea that brilliance and success are somewhat amorphous and innate and instead focused on what she believes to be a far more truthful indicator of success: a unique blend of perseverance and passion that she calls “grit”.

In Grit, she takes readers into the field to visit cadets struggling through their first days at West Point, teachers working in some of the toughest schools, and young finalists in the National Spelling Bee. She also mines fascinating insights from history and shows what can be gleaned from modern experiments in peak performance. Finally, she shares what she’s learned from interviewing dozens of high achievers–from JP Morgan CEO Jamie Dimon to New Yorker cartoon editor Bob Mankoff to Seattle Seahawks Coach Pete Carroll.

Winningly personal, insightful, and even life-changing, Grit is a book about what goes through your head when you fall down, and how that–not talent or luck–makes all the difference.