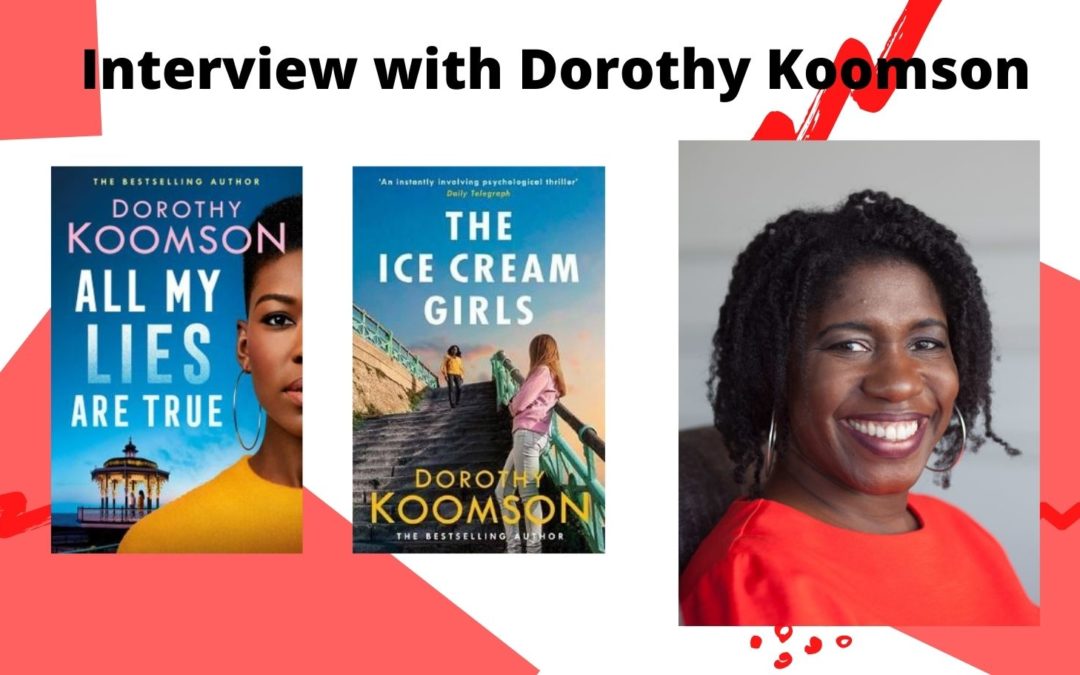 Here we’ll be taking a look at Koomson’s new book, as well as its precursor, and we’ll be sharing her kind responses to the questions that we asked her about her career and All My Lies Are True.

English author Dorothy Koomson has a bibliography that consists of sixteen novels, written in impressive succession since the publication of her debut in 2003.  She has been called “Britain’s biggest selling black author of adult fiction” by newspaper The Independent. Her most well-known works are My Best Friend’s Girl and The Ice Cream Girls. Last month, Koomson’s sequel to the latter, All My Lies are True, was published in the UK.  Her books typically combine romance, domestic drama and suspense, deftly handling tragedy and public debate while often exploring a central mystery. Koomson has been writing since she was just thirteen years old and has also worked extensively in journalism.

All My Lies Are True and The Ice Cream Girls 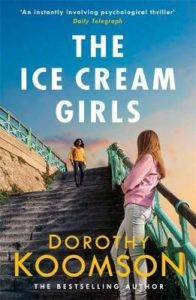 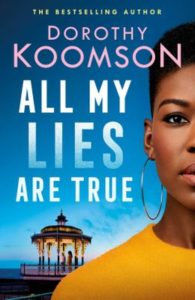 ‘A taut, twisting drama peopled with living, breathing characters you believe in and a story that has you rushing to turn the pages.’ – Miranda Dickinson

Published in July this year, Koomson’s newest novel is a continuation of the events that began with The Ice Cream Girls back in 2010. All My Lies Are True is a charged and haunting emotional thriller that weaves a driven narrative from its exploration of deception and tragedy.

You don’t need to have read The Ice Cream Girls to be utterly gripped by this follow-up, but having done so would certainly add more layers to your reading experience. Rest assured, however, that Koomson is skilled enough to reveal just enough of previous events to keep you fully immersed.

Ten years ago we first met The Ice Cream Girls Poppy and Serena. Back then, while in their teens, they witnessed a horrifying event, the ripples of which they are still feeling. Being the only witnesses to the death of Serena’s teacher Marcus – a predator highly skilled in manipulating girls and playing them off against each other – Poppy and Serena are accused of and tried for murder. Serena gets off without a sentence, but Poppy is found guilty. Once she gets out, Poppy has just one goal: to set the record straight. In the fallout, both are forced to confront the fact that they were insidiously groomed by an outwardly respectable older man… and to contend with the legacy of the abuse and horror that they have endured.

All My Lies Are True

Years later, Poppy and Serena’s lives have diverged. Wounded by prison and left unable to ever see people in the same light again, Poppy continues to contend with anger and pain as she embraces life as a wife and mother. Serena seemingly fared better. Leaving the court innocent all those years ago, she crafted a life of luxury for herself. The pair have not seen each other in some time, but their sad and uncertain story has grown to encircle those around them.

Logan, Poppy’s brother, will stop at nothing to exonerate his sister and expose Serena as the real murderer. But, in a complex and disturbing continuation of the abuse and deception that shaped the ice cream girls’ lives, Logan doesn’t go after Serena directly… he reaches for her through her daughter, Verity. Verity and Logan each have their own lies to add to this traumatic saga and, with the truth already buried beneath so much dishonesty, there’s no telling what further agony their involvement will spread.

This is a pair of novels that so enthrallingly examines multiple levels of abuse, fraud and intent that they will remain with you for some time, enduring, just like the teenaged ordeal that set these events in motion, for some time to come. 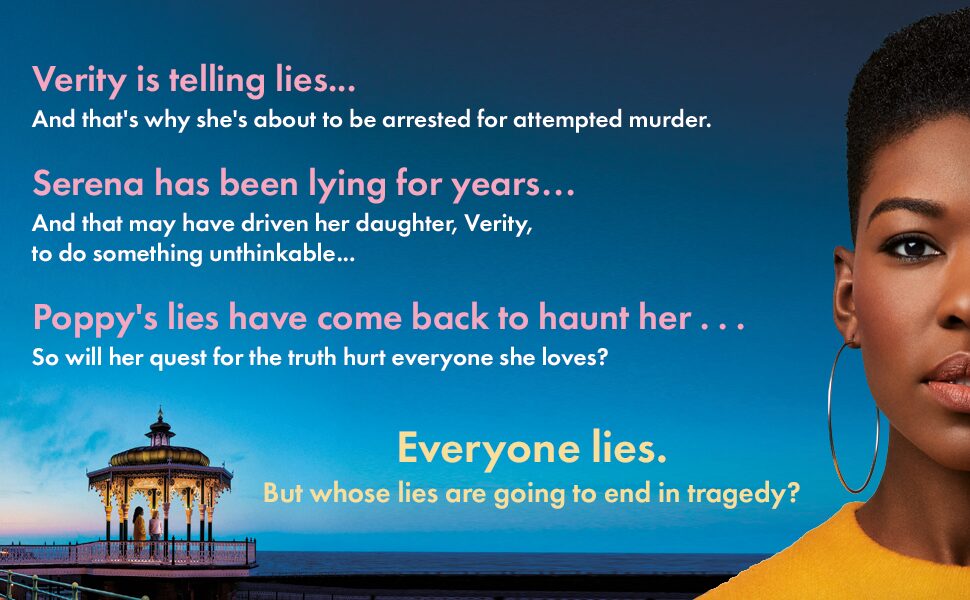 I did not know that, no. I’ve always said over the years that I don’t do sequels. My characters always go through so much, I didn’t see the need to put them through more of the same. Since I wrote The Ice Cream Girls back in 2009/2010 so much has changed in the law and society – we seem to be talking about all aspects of abuse now, not just the physical stuff. We seemed to be much more clued up so I wanted to explore if anything had truly changed. So I decided to look again at abusive relationships and how they effect everyone around them, using Serena and Poppy’s story as a framework. But I only did that because there was somewhere for their story to go. If there wasn’t a legitimate way to carry on the tale, I would not have gone back there.

I don’t think my feelings towards them have changed, but I am a different person to the one who wrote that book. Like I said, the world has changed and there is far more awareness about abusive relationships. It’s like the world is now where I was when I started researching The Ice Cream Girls. I thought I knew what abuse was about until I started to look into it much more deeply and I was shocked and transformed by what I found. Transformed because I wanted the world to know that it’s not simply about physical abuse – that doesn’t happen without the emotional and psychological abuse first. Poppy and Serena are still very close to my hearts, especially now the world can see what women like them go through.

I’m not sure I can answer that question. Each of my books has been successful in a very different way to the others. For example, The Cupid Effect is where my published author career began so that was an unparalled level of success, but My Best Friend’s Girl was translated into 30 languages, so that’s another level of success, while Marshmallows For Breakfast generated the most personal stories from emails, while The Ice Cream Girls was the first one to have a version shown on screen, but then When I Was Invisible was the book I wrote at a difficult time in my life . . . I could go on. There are so many ways to measure success I can’t single any of my books out for special mention.

I didn’t know I would be doing this for most of my life. At that age I wanted to be a librarian so I could work with books, or to work on magazines. I never really considered that writing books could be a proper job. Back then, I loved reading stories and I adored drama on the television, and after my mum told me I should try to write a book instead of getting sucked into going out with my friends all the time, I thought why not. I remember there was a young girl called Jayne Fisher who had written a series of books about a group of talking vegetables called The Garden Gang and that was another spur to try to write a book.

I have loved sci-fi stuff since I was little. I would buy comics at the weekend, get books from the library and watch all manner of shows on TV – Star Trek being one of my absolute favourites. And then, I worked in a comic shop for a few years during my university holidays. I am a proper, proper sci-fi girl. I’ve been lucky enough to write a couple of Doctor Who stories, too, but that’s as much as it gets with my career.

Eek! There are far too many to mention a few without leaving out others. My to be read list is so long I could cry!

It didn’t have any influence at all because they are very different entities. They have different characters, motivations, killer and ending. Although, I couldn’t have written All My Lies Are True or any other sequel the book version of The Ice Cream Girls had ended the way the television version ended.

All my novels are different from each other, I think. That’s partly because I like to try new things and to push myself with my work, which is why I went from writing romantic comedies to more emotional books with My Best Friend’s Girl to writing emotional thrillers starting with The Ice Cream Girls. I try not to do the same thing twice – where would be the fun in that?!

The pandemic has been hard on pretty much everyone. I have mostly been OK, actually, which I’m thankful for. I am very aware that this has been a very difficult time for a lot of people. The thing about what to about bringing in the pandemic and its after-effects to future work is HUGE. I’m still not one hundred per cent sure what I’m going to do about at least mentioning all that’s been happening in my next book.

I don’t identify with them in the sense I think I am them, but I do understand them. I may not like them or the things they do, but I’m always very clear about who they are and why they do the things they do. I think that helps to make them more realistic and rounded.

I’m working on a new book, of course. I’m also working on the TV adaptation of Tell Me Your Secret, as well as several other projects I have on the go. I am very, very busy right now. Which is great, really because everything I’m doing is very positive.

Be sure to pick up your copy of All My Lies Are True as soon as you can.

Be sure, also, to check out the rest of Koomson’s bibliography here: