Mandy Wiener and The Whistle Blowers 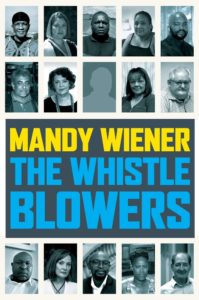 Here’s the thing about exposés: they’re designed to whip up controversy, invite scrutiny and justice (rightly) and perhaps even prompt some sort of hysteria. And in all that litigious frenzy and shocking revelation, there’s a group of people who tend to be forgotten about. While we’re all gasping and grimacing and demanding that the evil doers are punished in as many ways as we can conceive and saying, “well, can you believe what they’ve done now?!” we tend not to spare much of a thought for the brave, often vulnerable, people who help to bring these things to light – and, sadly, often suffer serious consequences for the part they’ve played. However, we do often tend to suggest that those blowing the whistle may themselves have been complicit in the crimes they’re exposing.

This is just the sort of thing that Mandy Wiener’s new book, The Whistle Blowers, explores. By allowing whistle blowers, some of whom have been involved in some of SA’s biggest recent scandals (cases like Bosasa, the state capture regime, the arms deal, and several instances of corporate and political corruption), to explore their involvement from their own perspectives and in their own voices, The Whistle Blowers uncovers the effects on mental health, and overall life, experienced by these people.

Much of the time, whistle blowers are pushed to the fringes of society. Their work opportunities dwindle horribly, they become social outcasts and they are subjected to all kinds of harassment. But Wiener is quick to point out that not all whistle blowers are the same. Some are driven to that point by an abiding commitment to truth and justice, some accidently play that role, and some are merely jumping ship before they are themselves exposed.

The Whistle Blowers is an enlightening, often affecting, look at personal sacrifice and the legislation, culture and perception that surrounds such difficult decisions.

Have a read of this interview for more about the book.

Ministry of Crime: An Underworld Explored

Following this, she returned to provide further detail on the activities and far-reaching influence of the country’s most disreputable and dangerous element – the element that comprises gangsters and organised crime.

In Ministry of Crime, Wiener argues that fatally corrupt political figures and enterprising criminals have seized control of agencies essential to the capable governance of South Africa. The organisations and authorities charged with safeguarding the country’s citizens and their freedoms have been rendered gutless and ineffective by the treacheries of extensive criminal networks that continue to flourish… often with the help of the people tasked with eradicating them.

This crucial book explores the seizure of the South African justice system, the infiltration of the government and the level to which the country has been left exposed by the unscrupulous and made vulnerable by the flagrantly felonious. 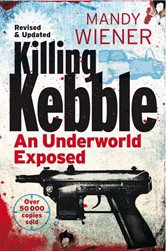 Back in 2005, a single crime exposed the ugly, brutal underbelly of Johannesburg – an underbelly ruled by drug barons and thugs, international smugglers and agency-hopping self-servers. When mining magnate and prominent businessman, Brett Kebble, was killed in Joburg’s suburbs, that act became the things that would tip SA democracy into dangerous ground. The investigation that followed enswirled such massive players as Jackie Selebi and Glenn Agliotti (to whose story Wiener was given complete access despite accusations that he organised Kebble’s assassination).

Killing Kebble is a fascinating true-crime saga that delves into high-level political interference and the epic feuds that divide agencies charged with keeping the country safe and lawful, exposes a police force dirtier and more corrupt than the crimes they ostensibly aim to prevent, and public servants with interest only in serving themselves.

It began with just one murder and went on to expose systemic criminality in the very places it ought not to exist.