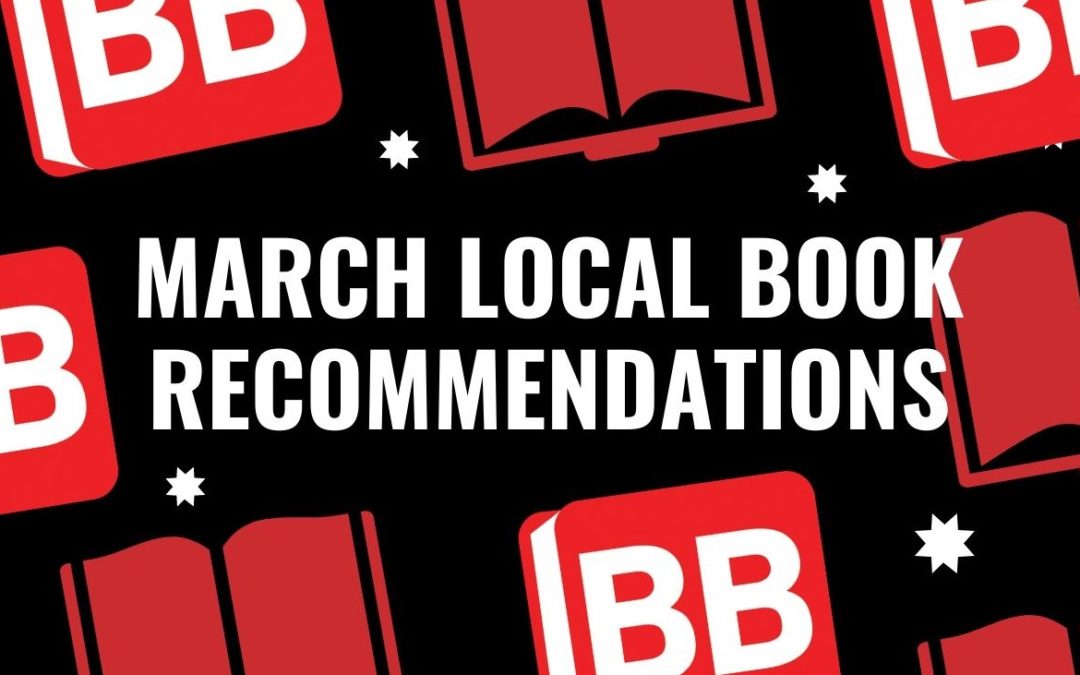 Here are six books by local authors being released this month. Whether you are a lover of nail-biting thrillers, wildlife and nature, political commentary or literary fiction, there’s something for you to look out for this March. Check these out: 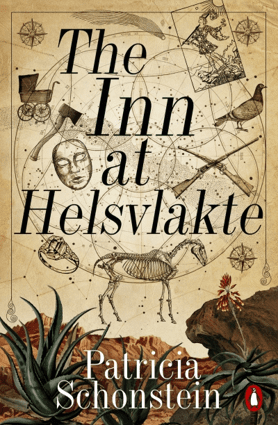 Throughout her long and celebrated career Schonstein has woven a certain sense of magic into tales that often draw significantly from troubling and traumatic historical events.

With her new novel, she conjures a landscape reminiscent of the arid Karoo, a place where fates are quickly sealed and interconnections often go unnoticed in the harshness. This is a place that emphasises human foible and family as much as it lends itself to war.

At the centre of this tale is Kitty Cloete, the reluctant wife of an innkeeper who excels at pursuits like playing the harp and horseriding, a woman who gets by in whatever way she can. When a war between the state and a band of separatists brings an injured captain to her door, it is Kitty’s music that nurtures him back to health. However, he is not the only important arrival. Soon, a bereft young man seeking vengeance for his murdered family and his destroyed home begins to seek out the one responsible… and the captains whereabouts will not remain hidden for long.

The Inn at Helsvlakte is a captivating tale of love and survival interspersed with mysticism: a book that combines seemingly dissident elements – like Tarot readings and civil war, music making and savagery – into a book that lingers like a beautiful and haunting folksong. You can read an excerpt here: https://www.timeslive.co.za/sunday-times/books/fiction/2020-02-28-fiction-friday–the-inn-at-helsvlakte-by-patricia-schonstein/ 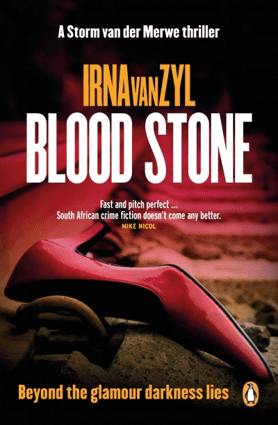 The newest Storm van der Merwe thriller is a fast-paced chase around the world that links together disparate cases and presents a world that boasts opulence and treachery in equal measure.

Storm van der Merwe is in the middle of a fraught murder investigation in Hermanus when she is suddenly called away. Though it is not complete, she must leave the case of famous SA fashion designer Beebee Bukelwa Babu, recently found dead in a luxury hotel, in order to deal with a matter far more personal and devastating. In London’s busy Paddington Station, Storm’s mother has been killed by a train. And she was pushed. Suddenly it seems as though the trouble with the case in Hermanus – the protests, the hysterical crowds and the prophet encouraging it all – might not be so incidental. Perhaps Storm’s mother was deliberately targeted. And perhaps Storm is a target too. But what does it all have to do with the missing red diamond that PI Andreas Moerdyk, a former colleague, is trying to locate? 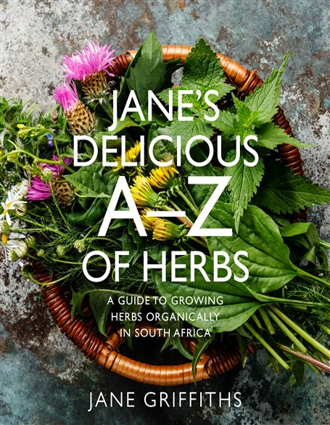 You have to wonder about people who aren’t nuts about herbs. They are just as attractive as many other garden plants, they smell better than most, you can eat them (or wear them as garlands or hair ornaments, which is something I personally recommend) and many of them are pretty simple to grow. Good for your garden, good for your food (and cocktails too, don’t forget).

“Jane’s Delicious A-Z of Herbs is a full colour, richly illustrated, hands-on guide to growing and using these productive plants. With a detailed and richly illustrated A-Z reference of 80 plus herbs, the book covers planting and growing, medicinal and culinary uses, as well as their many healing properties.

In her book, Jane shows you how to design and maintain your own herb garden. She also provides practical advice on how to propagate, harvest and preserve herbs, as well as useful tips on how to grow them in containers.”

Basically, this is the herb guide that you want whether you have more herbs than you know what to do with or you are just planning to get to that point. 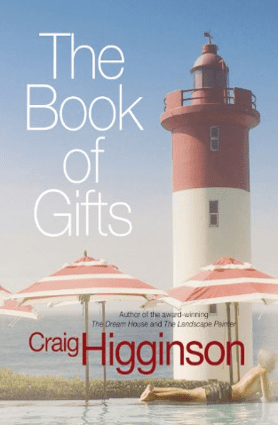 The Book of Gifts by Craig Higginson

This is Higginson’s fifth novel, and it only further cements him as one of SA’s most notable literary voices. The Book of Gifts wears the guise of a murder mystery or a thriller, moving backwards in time to find the source of an awful tragedy, and though it boasts plenty of excitement and tension it does not belong wholly within that genre because it is deliberately exploring something a little more.

The title refers to a gift that has been given or received by one of the main characters, and each gift forms the heading of a chapter. The book’s blurb asks: “What is the cost of giving a gift? What is the cost of receiving one?” So it’s a book about the kind of indebtedness to which we can all relate.

Chiefly, it is the story of Julian Flint, a boy who makes a habit of remaining hidden. During a family holiday in a luxurious hotel in Umhlanga Rocks he meets Clare. Clare makes that kind of invisibility impossible as she sees in him something that not even he had glimpsed before. It is this revelation, and their ensuing relationship, that leads them down an inescapable path, shaping everything that will come next.

Delving deep into the psyche, this is a novel that explores the dangerous intersections between loyalty and betrayal, seeing and not seeing, escape, concealment and retreat, all while maintaining the tight plotting of a top-notch psychological thriller.

You can watch Higginson talk about his new novel here: https://www.timeslive.co.za/sunday-times/books/fiction/2020-02-20-watch-craig-higginson-discusses-the-book-of-gifts/ 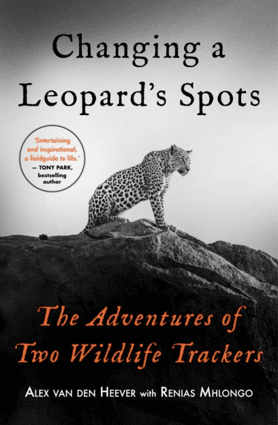 The two authors of this insightful book are world-renowned animal trackers whose craft has taken them from the plains of Londolozi to the jungles of South America and the grand forests of the US. They’ve tracked everything from big cats to grizzly bears, but it is the relationship between the two men that forms the core of this book.

Their many travels and adventures together, many of them dangerous, have stressed just how important it has been for them to be able to rely on each other and through their reminiscing on successes and failures, disappointments and dramas, the duo share the importance of their meaningful and often vital connection – highlighting, in the process, the profound significance of all such associations.

But Changing a Leopard’s Spots is also a book about South Africa. Through their many years together, they have challenged each other, learned from each other and remained united enough in the face of adversity to be able to break down and shed a light on the boundaries and divisions that so often hinder this country. The result is compelling adventure reading for the wildlife lover, and a deep appreciation of community and trust for everyone. 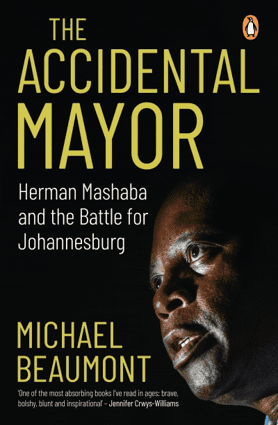 The Accidental Mayor: Herman Mashaba and the Battle for Johannesburg

In August 2016, well-known South African businessman Herman Mashaba became mayor of Johannesburg, heading a razor-thin DA-led coalition in the city. Three years later, in October 2019, he resigned from the party and from his position as mayor. At the time, Mashaba’s approval rating stood at almost 70 per cent and there were calls in overwhelming numbers for him to stay. In this explosive tell-all, his chief of staff, Michael Beaumont, reveals the real story behind these events.

The Accidental Mayor considers the achievements, challenges and controversies of Mashaba’s time in office, and describes what went on behind the scenes in the city and in the multiparty coalition. What was discovered about the previous government’s looting of Johannesburg? How did the ANC take to being in opposition? How challenging was it to work with the EFF? Which party proved the most difficult coalition partner? All these questions and more are explored in detail.

At a time when the DA’s popularity is in decline, The Accidental Mayor highlights the infighting and factionalism within the party and questions whether South Africa’s official opposition has reached the end of the road. Can Herman Mashaba, arguably one of South Africa’s most popular former mayors, offer an alternative for the future?