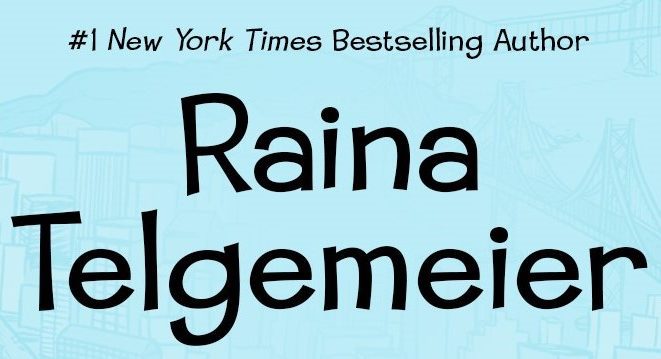 Raina Telgemeier is a graphic novelist, cartoonist and YA superstar whose work has garnered many awards, as well as a legion of fans. Her work, which is often autobiographical, tends to pinpoint some of the most relatable and emotionally resonant moments of teen life… with a particular focus on anxiety and mental health. The honesty of her work, and the bottomless charm of her art, continues to provide comfort to many young people and has helped hosts of readers to feel seen. As exercises in truth and empathy go, her oeuvre is something of a shining light.

Here, we’ll be taking a look at Telgemeier and her books. But first: 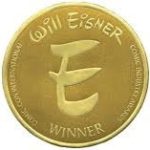 For those of you who don’t know, the Eisner Awards are often referred to as The Oscars of Comics and annually celebrate the best work in graphic literature. Named after pioneering writer and artist, Will Eisner, they have been running since 1988 and currently include 31 categories. Past winners includes the likes of Chris Ware, Alan Moore and Frank Miller… so you know it’s serious business. If you fancy a deeper delve into this essential institution – or are just on the lookout for some new graphic novels – check out https://www.comic-con.org/awards/eisner-awards-current-info.

Telgemeier was born in San Francisco and studied illustration in New York. Her first full work as author/illustrator was Smile (2010) – a graphic novel that chronicles her experiences in middle school and high school following a traumatic mouth injury that required years of subsequent orthodontic and dental surgery. The book was a hit. Praised for its humour, compassion and expressiveness, Smile depicts those years in a uniquely accessible and understanding way.

But before Smile, she worked on a serious of graphic novels based on The Baby-Sitters Club novels of Ann M. Martin. Ever since, her books have covered many of youth’s defining themes and has evinced particular affection for those who might consider themselves outsiders (including members of the LGBTQIA+ community).

All of which is to say, if you aren’t familiar with the artist and her work, now would be an excellent time to change that. 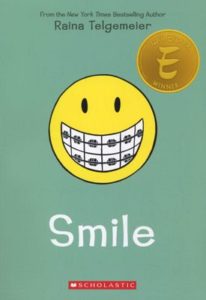 The one that made Telgemeier such a celebrated voice, Smile is unique among graphic novels. Recounting her days in sixth grade and upward, when she was desperate just to be an ordinary kid, Smile tells the ultra-relatable story of a girl whose teeth hold far too much power over her fate. It’s full of embarrassment, charm and humour… and it also happens to include an earthquake, a tricky boy situation and problematic friends.

There isn’t a middle school kid out there that this lovely, insightful book won’t comfort and amuse.

“Raina…shares her ordeal with orthodontics, appearance, ridicule and pain with warmth, dignity and insightful humor. This book belongs in every school and on every family bookshelf. You don’t need to have had braces to appreciate the message in this graphic novel. I so enjoyed reading it, I couldn’t put it down.” — School Library Journal 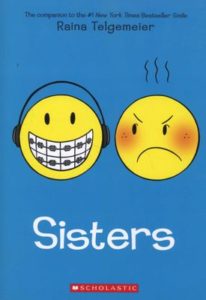 Sisters don’t always just get along. Raina was excited to be a big sister, but when Amara finally comes along, the whole thing is not what she was expecting. Amara is bad-tempered and solitary. Over the years, they don’t really grow that much closer. Until, that is, a baby brother comes along and something goes iffy with mom and dad, at which point Amara and Raina realise they’re going to have to stick together. 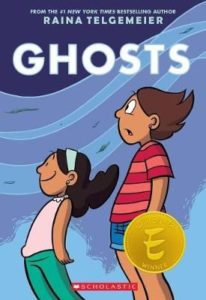 Catrina’s little sister, Maya, has cystic fibrosis. In order to expose her to a more healing climate, the family have decided to move to the coast of Northern California. It’s going to be tough for Cat to relocate and leave her friends behind, but, she gets it, and she loves her sister. Things take an interesting turn when they are told their new home is full of ghosts… and Maya becomes determined to meet one. For her sister, and for herself, Cat has to figure out how not to give in to her fears.

“Telgemeier has her finger on the pulse of middle-grade readers, and this might be her best yet.”
– Booklist, starred review 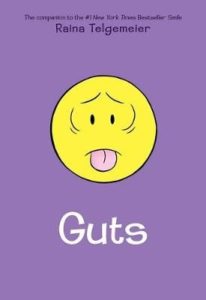 Another fantastic tale of school-time pressures and fears, Guts is all about one of those things that touched us all in our childhoods… tummy trouble.

After a tummy bug, Raina goes back to school hoping that everything will be normal. But while she’s dealing with the usual problems – friends, enemies, classmates and all the rest – she realises that her upset stomach is not going away. Obviously it’s not a bug. Probably it has something to do with all her worries. We’ve all been there.

“The story both normalizes therapy and shows a child developing useful coping mechanisms for anxiety in a way that will reassure, even inspire, readers.” — Publishers Weekly, starred review. One with a much more teen-based appeal, Drama is Telgemeier’s take on theatre nerds – their crushes, their friendships, their talents (or lack thereof) – and, well, drama.

Callie is a real theatre fanatic and pretty much all her dreams are tied into the stage. Unfortunately, she’s an awful singer. So, she goes into set-design absolutely determined to create a Broadway-worthy production… even though there’s basically no budget, she knows nothing about carpentry, tickets aren’t really selling, the cast is more or less incapable of working together and off-stage drama is creating all sorts of challenges. Throw in two dreadfully cute brothers and things get even more complicated.

“With the clear, stylish art, the strongly appealing characters and just the right pinch of drama, this book will undoubtedly make readers stand up and cheer. Brava!”
— Kirkus, starred review

Telgemeier’s faithful, but vibrantly reimagined, adaptations of the classic series by Ann M. Martin deliver the same dose of true-to-life drama and realistic issues while giving them a whole new visual impact. Through a group of suburban friends who run a baby-sitting agency, the series explores all the things that invariably affect us as youngsters: friendships, family, moving, illness, conflict and responsibility – and more.

“This book’s a lovely portrait of how friendship develops. It’s the details that make it a solid read, like an apology letter taking several drafts with different tones, instead of being right the first time through.”
— Comics Worth Reading

Go and Get Yourselves Some Raina Telgemeier to Read!