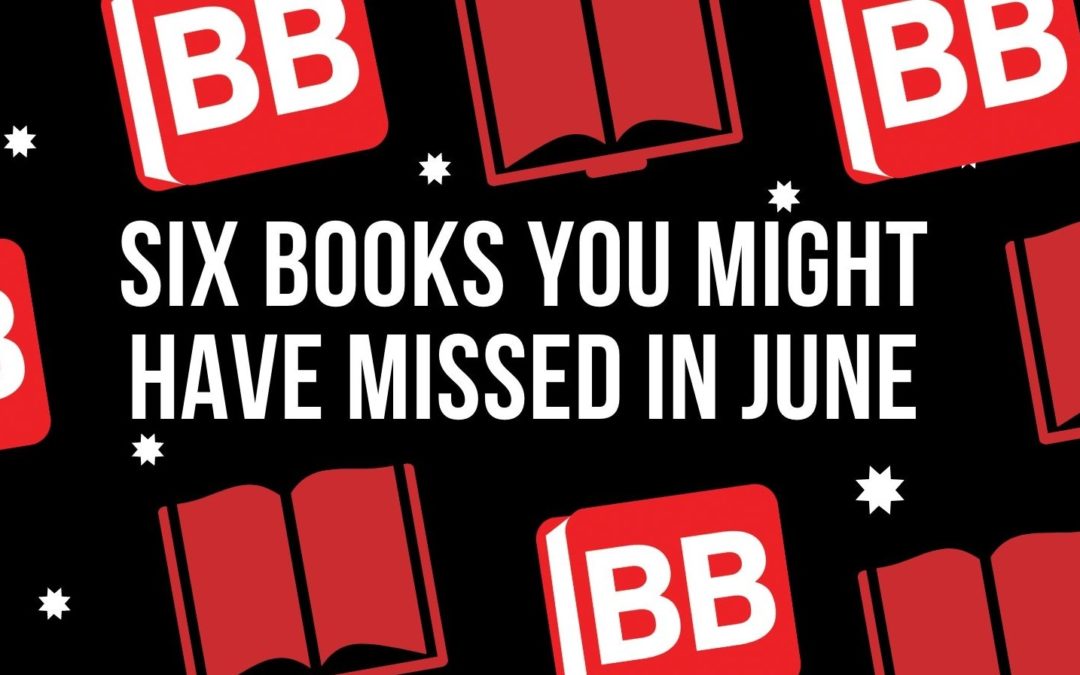 June’s been a big month for the proper causes. Between BLM and Pride, it has been a politically-charged month full of serious issues, just celebrations and re-examinations. As such, you might not have been able to get to some of the exciting titles that appeared in stores last month. Here are half a dozen that you might think about giving a go when you get the chance. 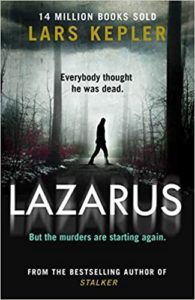 Nobody does serial killers like Lars Kepler. The Hypnotist and The Sandman established him as one of the dark crime greats. Fans of a solid, terrifying thriller are in for a treat.

Sweden’s most notorious serial killer.
Jurek Walter was shot and killed years ago. The police moved on and managed to forget the darkness that had tainted their lives.

Has come back from the dead.
But now someone is leaving a trail of broken bodies across Sweden and the clues all point to Walter. Detective Joona Linna is convinced his worst nightmare is becoming a reality: the man who tore apart his family has returned to finish the job.

He doesn’t just kill you. He buries your loved ones alive.
When Joona’s partner is taken – and locked inside an underground coffin – he finds himself with an impossible choice: leave her to die or walk into the trap set by the only man he ever feared. 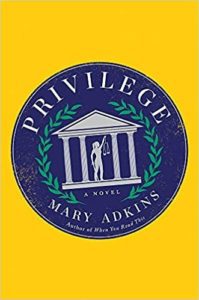 This timely novel manages to draw a deft portrait of many of the issues that have shaped the past few years. Mixing themes such as racial and economic privilege, sexual assault and class with the overarching politics of campus life, Privilege is the multi-POV story of three very different women trying to make their way in a world that was not made for them. It’s powerful, smart and, of course, incredibly relevant.

The publisher’s blurb gives a snapshot of the characters at the heart of this novel:

“Bea Powers put aside misgivings about attending college in the South as a biracial student in take part in Carter’s Justice Scholars program. But even within that rarefied circle of people trying to change the world, it seems everyone has a different idea of what justice is.

Stayja York goes to Carter every day, too, but she isn’t a student. She works at the Coffee Bean, doling out almond milk lattes to entitled students, while trying to put out fires on the home front and save for her own education.

Their three lives intersect unexpectedly when Annie accuses fourth-year student Tyler Brand of sexual assault. Once Bea is assigned as Tyler’s student advocate, the girls find themselves on opposite sides as battle lines are drawn across the picture-perfect campus-and Stayja finds herself invested in the case’s outcome, too.”

We Begin at the End by Chris Whitaker 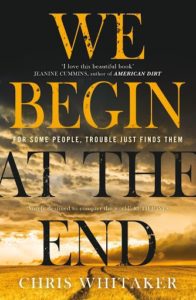 Chris Whitaker’s previous two novels, Tall Oaks and All The Wicked Girls gained him a good deal of acclaim, bagged him a couple of awards and invited Gone Girl comparisons. From his third, We Begin at the End, you’ll get a captivating meditation of life’s grey spaces, a cast of memorable characters and a riveting complex mystery.

“With the staggering intensity of James Lee Burke and the absorbing narrative of Jane Harper’s The Dry, We Begin at the End is a powerful novel about absolute love and the lengths we will go to keep our family safe. This is a story about good and evil and how life is lived somewhere in between.

‘You can’t save someone that doesn’t want to be saved . . .’
For some people, trouble just finds them.
Thirty years ago, Vincent King became a killer.
Now, he’s been released from prison and is back in his hometown of Cape Haven, California. Not everyone is pleased to see him. Like Star Radley, his ex-girlfriend, and sister of the girl he killed.
Duchess Radley, Star’s thirteen-year-old daughter, is part-carer, part-protector to her younger brother, Robin – and to her deeply troubled mother. But in trying to protect Star, Duchess inadvertently sets off a chain of events that will have tragic consequences not only for her family, but also the whole town.

How far can we run from the past when the past seems doomed to repeat itself?” 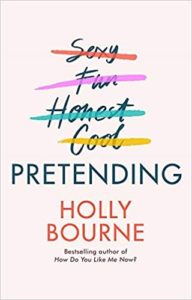 One of this year’s most anticipated romantic comedies, Holly Bourne’s new adult novel is hilarious, insightful and really quite comforting. The lengths to which we all will go to find love and romance – and the deceptions, complications and painful truths that spring from this search – make for practically boundless comedic material. Fortunately, Bourne’s writing is sharp, witty and compellingly honest enough to make this an unforgettable foray into dating mishap.

“He said he was looking for a ‘partner in crime’ which everyone knows is shorthand for ‘a woman who isn’t real’.

April is kind, pretty, and relatively normal – yet she can’t seem to get past date five. Every time she thinks she’s found someone to trust, they reveal themselves to be awful, leaving her heartbroken. And angry.

Gretel is exactly what men want – she’s a Regular Everyday Manic Pixie Dream Girl Next Door With No Problems.

The problem is, Gretel isn’t real. And April is now claiming to be her.

As soon as April starts ‘being’ Gretel, dating becomes much more fun – especially once she reels in the unsuspecting Joshua.

Finally, April is the one in control, but can she control her own feelings? And as she and Joshua grow closer, how long will she be able to keep pretending?” 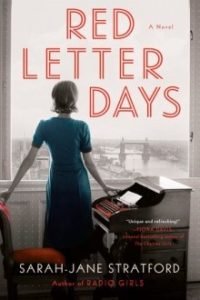 A meaningful dip into the glamourous/incredibly-dangerous world of 1950’s New York, Stratford’s newest historical novel manages to tread elegantly between humorous and tragic territories, while also exploring a rich topic: that is, Red Menace-Communist-Blacklisting and fledgling writers.

“When two brave women flee from the Communist Red Scare, they soon discover that no future is free from the past.

Amid the glitz and glamour of 1950s New York, Phoebe Adler pursues her dream of screenwriting. A dream that turns into a living nightmare when she is blacklisted—caught in the Red Menace that is shattering the lives of suspected Communists. Desperate to work, she escapes to London, determined to keep her dream alive and clear her good name.

There, Phoebe befriends fellow American exile Hannah Wolfson, who has defied the odds to build a career as a successful television producer in England. Hannah is a woman who has it all, and is now gambling everything in a very dangerous game—the game of hiring blacklisted writers.

Neither woman suspects that danger still looms . . . and their fight is only just beginning.” 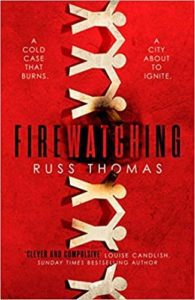 If you’re after an excellent new voice in crime-fiction, and if you have a particular taste for complex cold-case mysteries, you’ll want to acquaint yourself with Russ Thomas and his new novel. It has everything that you want in an investigative thriller, and also benefits from a fascinating and unique new lead detective, seriously imaginative writing and an absorbing premise.

ONE WRONG MOVE
A body is found bricked into the walls of a house. From the state of the hands, it’s clear the dead man was buried alive. Soon, the victim is linked to an old missing person’s case and DS Adam Tyler is called.
WILL IGNITE
As the sole representative of South Yorkshire’s Cold Case Review Unit, Tyler recognises his role for what it is – a means of keeping him out of the way following an ‘incident’. When this case falls in his lap, he grabs the opportunity to fix his stagnating career.
THE CITY
And then Tyler discovers he has a connection to the case that hopelessly compromises him. He makes the snap decision not to tell his superiors, certain that he and only he can solve the crime. But now Tyler must move carefully to find out the truth, without destroying the case or himself.

Meanwhile, someone in the city knows exactly what happened to the body. Someone who is watching Adam closely. Someone with an unhealthy affinity with fire. . .

A taut investigative thriller bursting with character and tension, introducing an enigmatic, fresh lead detective unlike any you have met before – Detective Sergeant Adam Tyler – for fans of Adrian McKinty, Tana French, Steve Cavanagh and Sharon Bolton.