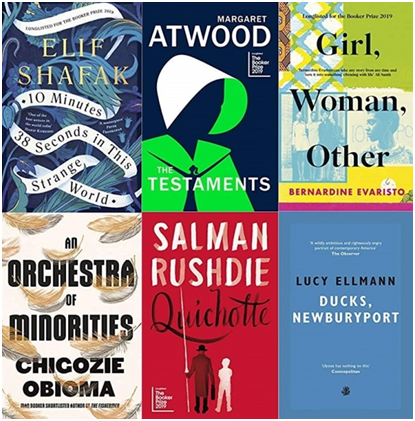 One of the very best things about the Booker Prize is that it brings to the very forefront of the publishing world the kinds of literary and diverse works that so often lack effusive marketing campaigns, books that are true achievements regardless of genre and bestselling appeal. If nothing else, its longlist, even before we get to the six that make up the shortlist, serves as a collection of well-won recommendations: a clear and cut-above set to which we spoiled-for-choice readers can gratefully turn. With that in mind, and with full certainty that all the nominees this year are well worth a read, here are the big six of the shortlist and a little about each of them. Read them all if you can.

Girl, Woman, Other by Bernadine Evaristo

This nominee for this year’s Booker Prize is a polyphonic exploration and celebration of identity. Featuring twelve characters with a lot in common (they are all British black women) and with a fair amount not in common (they vary in age, sexual identity, ancestral and ethnic origin and family background, to name a few), this is a book teeming with life stories: a stylistic and unconventional plunge into diversity, unity and their many overlaps.

Bernadine Evaristo is a big name when it comes to depicting and empowering the African diaspora. With eight books under her belt, her work often combines fiction and verse while mixing past and present, speculative and factual, cultures and backgrounds. Girl, Woman, Other is no exception. In a current climate that allows for little empathy and is less than generous when considering the experiences  of the marginalised and the atypical, this book provides a definite salve. The women whose lives it explores range from the teenaged to the nonagenarian, from the traditional to the gleefully unusual, and together they form a vibrant tapestry of inclusion and reclaimed presence. It’s an irresistibly contemporary work that unites voices and identities as few fictions do. Evaristo herself has said that she had a hard time whittling the cast down from one hundred women to just these twelve, and that dedicated love of unheard stories here brings us a crackling and electric song of journeying womanhood: a must read paean to all the good that our age is only too happy to ignore. 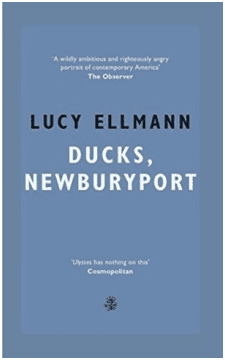 This 1000+ page opus is one of those books that will be attracting fun tags like “great American novel” and “tour de force”. There’s a great deal to say about it… mostly because it is a novel that has a great deal more to say than a single reading could ever reveal, much less a blurb. Stylistically, it is a rhythmic tide of feeling and prose, a diluvian wealth of invention and inquiry. Narratively, it is shy to no modern concern; it’s a searing litany that begins as a list of common anxieties and balloons beautifully into a vast and unflinching meditation on all the evils that constitute humanity’s blithe march toward destruction and hopelessness. Seriously, no contemporary fear is left unconsidered: kindness and humanity, the moral state of things, barbarity, environmental crisis, children, loss, baby animals, survivalists and school shootings…

We’re getting a little ahead of ourselves. In Ducks, Newburyport a fretful Ohio homemaker tries to make sense of the US and the morass of fearful, contradictory and sometimes senseless information and misinformation that it has become. She fears for her children. She fears for planet Earth and its creatures, people’s futures, inevitable disasters. It’s a big, big thing. This one woman’s list of rightful fears expands into something universal, something very funny, profoundly emotional, realistically scared and joyful. Throughout, whimsical and emergent narratives are interwoven. The main character’s dread diverts her into a story about a lioness and her cubs, takes her down the path of her own impressionistic history, leads her to connect the things she can see from her window to the more massive goings-on of a world scorched by uncertainty.

To mention that it is a book without linear structure, without plot, without character development and bite-sized bits of entertainment might sound like a warning. It is not. In this case, to say so is to acknowledge that this incredible work of innovation and love is an absolute wonder, and it is to revel in such proof that literature can still provide something new and original. It’s a proper marvel. Be one of the brave readers to reap its many rewards.

The Testaments by Margaret Atwood 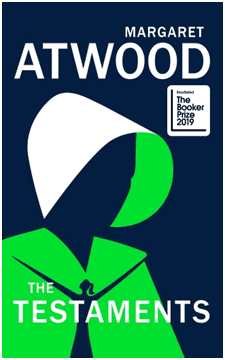 At the moment though, The Handmaid’s Tale reigns supreme in Atwood’s oeuvre. And rightly so. Not only is it singularly profound and undauntedly prophetic in its handling of maniacal patriarchy and close-to-home totalitarianism, it has also given us some of the best television in recent memory. But we’re here for the books. And The Testaments is a much-coveted sequel, narrated by three women of Gilead and beginning fifteen years after the close of The Handmaid’s Tale.

Do you remember Aunt Lydia, the (conflicted) instructor whose hard mundanities, gentle iron fist and intriguing complexities maintained grudging and sometimes cruel order among the Handmaids? It’s not unreasonable to say that her being one of The Testament’s narrators is really very exciting. Of all the compelling and horrifying characters in Gilead, Aunt Lydia was always one we wished to know more about. Here we get to know how she achieved her arch position, how her outward demeanour differs from her inner life, what intrigue and scheming has sustained her. She imbues this follow-up with much wit and circumspection. And this is not the only gift waiting within.

We’re also getting to hear from two more voices in The Testaments – two young women, one raised in Gilead, one in neighbouring Canada, whose unknown identities give this novel much of its suspense. Through these three women, Atwood dilates the story of the Republic of Gilead, including reactions from other countries and detailing combative measures to a new degree. This sequel is an exciting companion to a true classic of speculation/dystopia, but it is also a contemporary thriller in its own right; a gripping tale of malignant repression, strangled identities and resistance. It’ll be one of this year’s most notable books and, most importantly, it will be a delicious addition to a recent pop-culture phenomenon that has truly earned its place… and to a literary canon like no other. 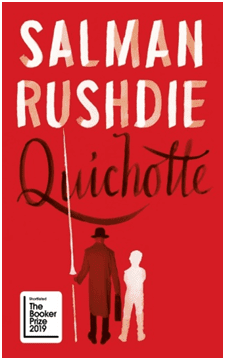 Regular readers of this multi-award winning, rightly legendary, author will know what to expect from whatever fiction he conjures: an intensely intelligent and imaginative read that draws from myth and allegory, as deftly as water is drawn from a well, to gift us a love letter to literature itself. What we should all know is that a Rushdie book is an inevitably rich thing – an exercise in magic and reality all at once, a melding of the modern and the ancient. His work is often challenging – but never in a way that doesn’t work in your favour.

His new novel, Quichotte, begins with Cervantes’ classic Don Quixote, obviously, taking up its immortal satire and using it to give the Western World and all its foolishness and faux-culture a playful, but well-deserved, slap. Thence issues chaotic pastiche and bombastic metafiction – a Russian dolls type narrative situation that delights in its own picaresque tricks. Summary is a tall order, but we’ll give it a go.

Sam DuChamp is a writer of pulpy second-rate thrillers. In an attempt to reinvigorate his failing craft, he creates Quichotte, a tv-obsessed salesman who promptly falls hopelessly in love with a tv star he’ll never have. Nonetheless, Quichotte embarks on a gallant mock-quest across America, taking Sancho with him, braving the daft perils and too-real pitfalls of an age wherein anything can happen without making a jot of sense, to prove to this starlet that he is worthy of her hand. But while Quichotte gets down to business being courtly and courageous, his creator’s mid-life crisis strides on undeterred. Things aren’t a great deal simpler for Sancho either – who is in fact imaginary, and is on his own quest to become real (in proper Pinocchio style).

All in all it’s a heady comingling of tangled, layered narratives that seek, in their own ways, to navigate the state of the West… a place swimming in its own multiplicity, a world on the brink of collapse, an age that is as likely to mistake itself for fiction as it is to go nuts in pursuit of concrete fact.

Turkish novelist, Elif Shafak, returns with a courageous and profound new book that deliriously blends sense-memory with tragedy and abuse.

“In the first minute following her death, Tequila Leila’s consciousness began to ebb, slowly and steadily, like a tide receding from the shore. Her brain cells, having run out of blood, were now completely deprived of oxygen. But they did not shut down. Not right away…”

What happens in the moments immediately following death? In 10 Minutes 38 Seconds in This Strange World, each of those moments brings a vivid new memory to the winding-down mind of Tequila Leila – a sex worker whose final breaths take place in a rubbish bin on the outskirts of Istanbul. Her dying mind, prompted by lingering sounds and smells, paints a trenchant portrait of a woman who managed to hold on to herself even as the world seemed intent on beating the humanity out of her. From moving vignettes of her colourful childhood to the unspeakable cruelties that threatened to break her at every turn, what is revealed is a bleak and brutal summation of womanhood in a violent world – a hard tale of suffering and resilience that remains moving and life-affirming in the face of a limitlessly unkind reality.

As an intricate and searing feat of storytelling, and as a devastating yet luminous portrait of a worthy protagonist, 10 Minutes 38 Seconds in this Strange World is an irresistible triumph: inventive, heart-breaking and fiercely truthful.

An Orchestra of Minorites – Chigozie Obioma 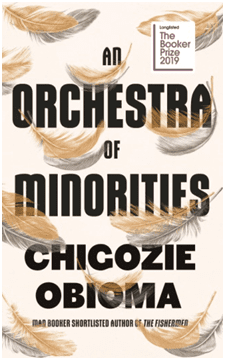 With elements of myth, tradition, romance and tragicomedy, Obioma’s newest novel is an epic tale of destiny and perseverance shot through with classic inspirations. It’s a tale told by the guardian spirit of Chinonso, a young poultry farmer who risks everything to be worthy of the woman he falls in love with. Desperately smitten with Ndali, but very much aware that he is not her equal, Chinonso is rejected as a suitable partner by her family. Determined to prove himself, he sells nearly everything he owns and sets off for college in Cyprus… only to discover that he has been the victim of a bald-faced con. With nowhere to live and without a penny, he drifts further from the life of which he dreamt and wonders if he will ever make it home.

An Orchestra of Minorities is heavily influenced by Nigerian mythology and spiritual practice. As such, the narration is quite unusual, but it’s also unerringly beautiful. There’s something timeless about the story, but it is also filled with enough innovation and originality to give its heartrending drama an extra multi-cultural freshness.