David Baddiel and His Most Recent Book, The Taylor Turbochaser 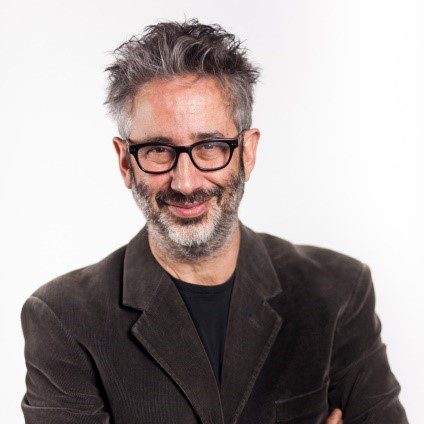 Comedian, television personality and author David Baddiel has by now made quite the smash with his middle-grade children’s books. And rightly so. His novels are reliably hilarious, invariably exciting and usually quite thoughtful. Like all the best children’s authors, Baddiel regularly manages to incorporate balanced life lessons into his stories.

Since he burst onto the scene with his debut, The Parent Agency, Baddiel has been delighting young readers and tickling funny bones all over the place. Here we’ll be taking a look at his newest blockbuster, as well as going over his fabulous backlist. All the individual books on this list are available at R165 from your nearest Bargain Books. 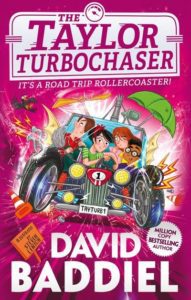 What do you get when you combine a girl who dreams of racing, a genius inventor and a high speed roadtrip? That’s right. A whole heap of fun! Not only does The Taylor Turbochaser offer up a non-stop thrill-ride filled with out-loud laughs, it also subverts gender stereotypes and emphasises that disability is no obstacle to adventure at all.

Amy Taylor is an eleven-year-old self-confessed petrol-head. She loves all things cars. Above all she wants to be a driver. But her broken-down old wheelchair is much up to racing. Fortunately, her best friend Rahul happens to be a whizz with inventions and soon he has converted Amy’s lacklustre ride into something properly speedy: The Taylor Turbochaser! There’s not much time to ease into though, and soon it’s time to hit the road… and for Amy to drive as she has never driven before. 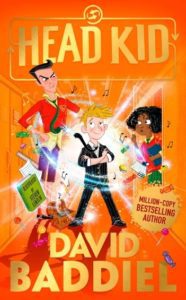 Have you ever sat in class at school and wondered what would happen if somebody else was in charge? Somebody more like you, perhaps? What if you had the power? This is Baddiel’s  laugh-out-loud take on the old switcheroo that incorporates important life lessons as well as heady entertainment.

Bracket Wood is about to be visited by the school inspectors. But there’s one big problem: Ryan Ward. The maestro of practical jokes, Ryan has played so many tricks that in the end the Head Teacher just walks out. And then the new Head Teacher, Mr Carter, arrives. A man so strict even the teachers are scared of him. So imagine his surprise – and Ryan’s – when they swap bodies! Now Ryan is Head Teacher – and his mortal enemy is one of his pupils. It’s every naughty kid’s dream! 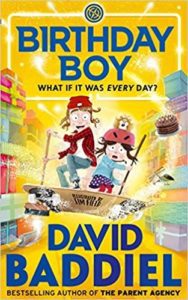 A madcap entertainment adventure full to brimming with his trademark mix of magic, laugh-out-loud hilarity and heart, Birthday Boy is a tale about appreciating the wonderful things that come in moderation and being careful what you wish for.

There are times when we have all wished that we could have more birthdays, right? A year is such a long time to wait. What if it could be your birthday every day?

10 year old Sam Green loves birthdays. He loves everything about them. The special breakfasts, the presents, the parties, the decorations, the candles… everything. And he is especially excited about his eleventh birthday. When it finally rolls around, he is thrilled. What a smashing day! But then, he is also quite thrilled when it turns out to be his birthday again the next day, and the day after that, and the day after that. It’s pretty awesome to begin with. How could it not be? The thing is, this sort of thing can soon lose its shine, and it isn’t long before things start to go catastrophically wrong. And with things going so frightfully wrong, it’s not just his birthday that Sam is on the verge of losing… A tale about our own natures and learning to be who we truly are, AniMalcolm is a testament to all that can be learned by assuming a different point of view… and how great animals are, yes, it’s about that too.

There’s basically no kid in the world who hasn’t wondered what it must be like to be an animal. Heck, it’s not just kids, let’s be honest. Soaring like an eagle, running like a cheetah… we are full of wonder for the animal kingdom.

Not Malcolm though. No. Malcolm doesn’t like animals. Malcolm likes technology and things that aren’t messy or smelly. Which is unfortunate, given that his house is basically a menagerie. He’ll be relieved when that school trip finally comes around and he can escape all those pets for a while. Only it turns out that the trip he’s been waiting for is to a farm! This one celebrates two things that are incredibly close to many young hearts: twins… and video games! Anybody who ever said that video games are of no use to anyone has never been in this kind of situation – but then, who has? With a trademark dose of cautionary Baddiel wit, The Person Controller is a hilarious tale of incredible skills and unforeseen consequences.

Twins Fred and Ellie are alike in almost every way. They like almost all of the same things, and the thing that they like above all else is video games. Actually, they’re both terrifically good at them… which is handy because, truth be told, they’re not all that much good at anything else. One thing they are equally bad at, sadly, is dealing with the school bullies.

When the twins receive a mysterious controller from a chap called the Mystery Man they are puzzled to begin with. They don’t know what they’re supposed to use it for.  It’s unlike any of their others and doesn’t work on any of the games that they already have.

When they eventually figure out what it does control, they figure it will put an end to all their troubles. But things aren’t about to be that simple. Life is not a video game after all. 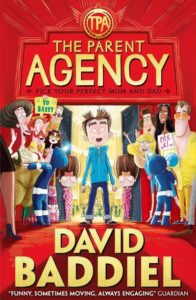 His very first tip-of-the-hat to the relatable wishes of so many kids, Baddiel’s debut hilariously posits a fantastical world in which children are not at the mercy of the boring parents that they somehow ended up with. As with all Baddiel’s books, however, having a wish come true is not all it’s cracked up to be.

Barry Bennet, it must be said, doesn’t have a huge amount of fondness for his parents. In fact, he has quite the list of things for which he blames them. Things like being just dreadfully boring and saying they’re tired all the time. Things like calling him Barry.

So what happens when Barry is transported to a magical world in which the whole thing is flipped on its head – a world where, instead of parents choosing to have kids, it’s the kids who get to choose their parents? It’s everything Barry could possibly want, right? But, of course, it’s not that simple. 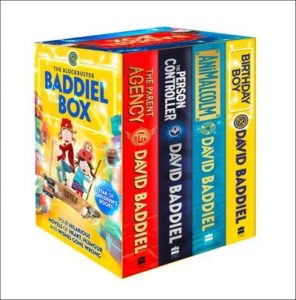 Fortunately, the above four books are all available in one affordable box set! If you’ve not yet introduced your 8-12 year old friends/relatives/children to the wonderful world of David Baddiel, this is the best way to start!