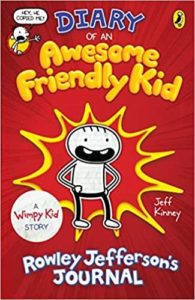 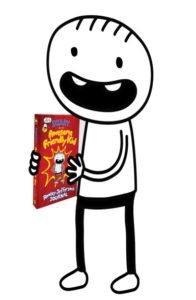 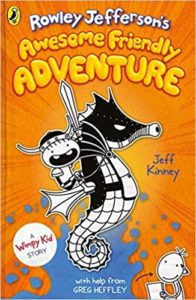 To date, as many, many of us know, not least those of us with kids, there have been thirteen volumes of Greg Heffley’s Diary… The Diary of a Wimpy Kid. The series has been instrumental in encouraging an entire generation of reluctant readers to get stuck into books, it has inspired a slew of imitators, and it has lent itself to screen adaptations. As middle-grade books go, the DOAWK series has been an unmatched phenomenon.

However, Greg is not the only person involved in his typically madcap adventures, and now it is time to hear more from his faithful biographer, Rowley Jefferson. Somehow, Rowley has been managing to keep a record of his own experiences even as he is frantically keeping up with Greg’s exploits.  When Greg is rich and famous one day, everyone will want to know the full story, after all. The thing is, Rowley is not exactly the best person to fulfil this role. Frankly, his biography is a hysterical mess.

With Rowley Jefferson’s Journal we were granted a hilarious new perspective on the Wimpy Kid world, we got to see our most beloved characters in a new light, and were given the chance to see the stories through different (possibly less wimpy) eyes! 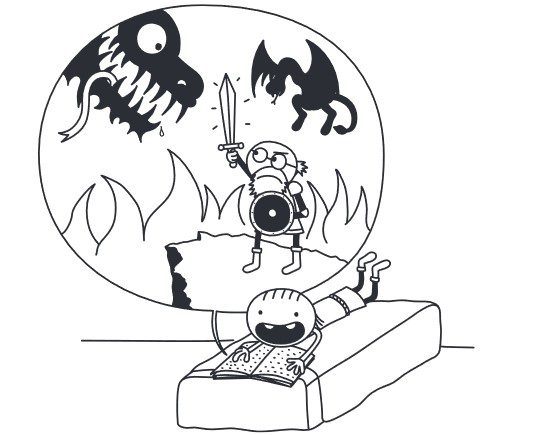 This is a Wimpy Kid story like no other. Whatever quests and missions our kid-duo has already embarked upon, none of them has been quite this magical.

Accompanied by his best friend, Garg the Barbarian, Rowley must leave the relative comfort of his little village in an epic quest to save his mom from the infamous White Warlock.

Rowley Jefferson’s Awesome Friendly Adventure is right up there with the very best instalments in the DOAWK series, and delivers just as many oodles of zany illustrations, creative imaginings and quirky writing as any you’ve read so far.

Be sure to read the first chapter of this terrific new escapade here.

And for more fun stuff from the Wimpy Kid World, check out https://wimpykid.com/