Here are 7 recent titles that you’ll want to check out. We’ve got holiday romance, period scandal, ultra-modern espionage, vigilante justice and more. Whichever aspect of your book collection you are looking to boost, there’ll be something for you here. Take a look:

From Venice with Love by Rosanna Ley 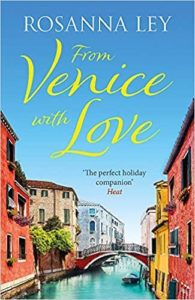 A lot of our focus lately has been on hard-hitting thrillers, but here’s an enchanting “holiday read”. Of course, you don’t need to actually be on holiday to read it. Given the situation it might more rightly be viewed as a holiday from worry. Which it certainly is.

Facing the dissolution of her marriage, Joanna returns home to Mulberry Farm Cottage in rural Dorset, England. It’s as beautiful as she remembers, but is in need of some work. There she finds her sister Harriet battling to keep the farm running while also tending to their colourful, but often hard-work, mother.

Though she was certain that the farm would provide her with ample distraction, she does come upon one that she was not expecting. In the attic she discovers a bundle of love letters written by a well-travelled artist named Emmy. Joanna is immediately entranced by the scenic and magical world evoked by Emmy’s letters and sets herself to unravelled the story of Emmy’s life.

But as Joanna journeys with Emmy into Lisdon, Prague and Venice, Harriet’s embattled position becomes even more complicated with the addition of a mysterious prowler. Perhaps Emmy’s letters can somehow help the two sisters to rekindle their bond and save the family farm once and for all.

Relaxing, sun-infused and above all gorgeously romantic, From Venice with Love is just the sort of escape to which we all ought to be treating ourselves.

The Operator by Gretchen Berg 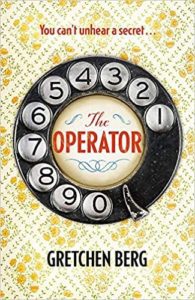 It’s hard to resist a good eavesdropping opportunity, isn’t it? Well, imagine if you had access to every telephone conversation in your neighbourhood.

The switchboard operators of Wooster, Ohio are not immune to this temptation. In the largely wholesome days of 1952, they love nothing more than to snoop on their neighbours’ chats and share the scandals and gossip afterwards. Vivian Dalton only wishes that she could hear something more scandalous than the usual petty feuds and niggles. But one night, she regrets ever having wanted more. The secrets that she hears one night in December threaten to completely derail her life. She’s not about to just wait for it to happen though. With her switchboard at the ready, Vivian sets out to uncover the whole truth. As is so typically the case though, one secret simply tends to attract more.

The Operator will be completely irresistible to anyone who knows the drama of living in a small community surrounded by nosy neighbours. Funny, packed with curious period details and ultimately full of as much sweetness as secrecy, this is an all-too-relatable portrait of small-town life.

The Rearranged Life of Oona Lockhart by Margarita Montimore 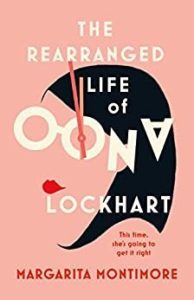 What if you found that you were a literally different person each year? And what if those years decided to pass in whatever order they fancied?

These are just two of the titillating and witty questions raised by the premise of this surprising, uplifting and gleefully magical romp through times and identities.  If you enjoy dollops of quirk and charming implausibility, this is one for you.

Brooklyn, 1982. Oona Lockhart is about to celebrate her 19th birthday and ring in the New Year. But at the stroke of midnight, she is torn from her friends and boyfriend, finding herself in her fifty-one-year-old body, thirty-two years into the future.

Greeted by a friendly stranger, Oona learns that on every birthday she will leap into a different age at random. Still a young woman on the inside, but ever changing on the outside, who will she be next year? Wealthy philanthropist? Nineties Club Kid? World traveller? Wife to a man she’s never met?

As she struggles between fighting her fate and accepting it, Oona must learn to navigate a life that’s out of order – but is it broken?

The Portrait by Ilaria Bernadini 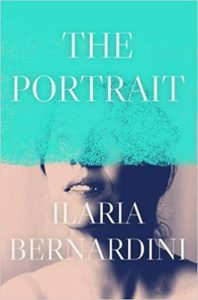 Nuanced, beautiful and very finely balanced, this is a fresh and original take on some familiar themes that manages to become something quite beguiling in its own right. Complex women, tragedy and secret love are drawn together here by a single everyday tragedy and the ingenious plan it spawns.

When prominent businessman Martin Acla suffers a stroke, two women are grief-stricken. One of those women is his wife, Isla, an artist, and the other is his devoted secret lover Valeria Costas, an internationally renowned writer. Valeria is devastated by the news and knows that, above all, she must find a way to be with Martin during his final days. Commissioning Isla to paint her portrait proves a subtle way to insinuate herself into the household and while Martin lies in a coma, Valeria visits the house day after day. While the portrait slowly takes shape, so too do the lives of these two women as they gradually exchange the truths and vulnerabilities of their lives. But Valeria cannot be certain of how much Isla knows, she merely has to hope that, while the two of them deal separately with their grief and unwittingly reveal more than they intend, her deception will last until the end.

Empathetic and seductive, moving and laced with dark humour, The Portrait deftly crafts something astonishing from an already fascinating love triangle.

After Dark by Dominic Nolan 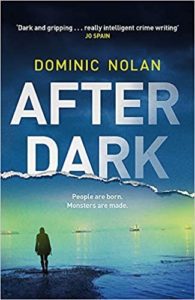 If Dominic Nolan is not already among your favourite crime-fiction writers, this must-read is all the proof you’ll need that he is an impressive new voice in the genre.

After Dark is an expertly crafted thriller and is most notable for its lyrical yet immersive darkness, compelling characters and stunningly plotted grey areas.

This is the second book to feature Abigail Boone, a former policewoman who was kidnapped while working a missing person case. Injuries sustained during her kidnapping left her with amnesia, as well as with her own particular sense of angry justice. Upon her emergence from prison, Boone is approached by DI Barb Bowen. Bowen is investigating the tragic case of a young girl who appears to have been imprisoned and abused for her entire life, and she comes to suspect that the same monster responsible for this may have been involved in cases from thirty years ago. The furious, desperate hunt that ensues is brutally captivating.

Best for readers who prefer their crime fiction as gritty and unflinching as possible, After Dark veers toward the horrifically tragic and truly disturbing.

Watching from the Dark by Gytha Lodge 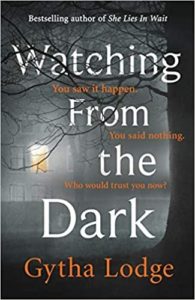 Some crime thrillers can hinge on a single, tantalising question. In this case, that question is “why did he hesitate to call the police?” Watching from the Dark manages to tap into a singularly powerful nightmare scenario, one with which we are all familiar, whether or not we have actually experienced it: watching helplessly as something awful happens to someone we love.

While Skyping with his girlfriend Zoe one night, Aidan Poole quickly realises that she is not alone in her flat. Unable to alert her, all he can do is listen helpless as she is drawn into a violent fight for survival. His horror soon turns to desperation when he is left in silence. All he wants is to know whether she is okay. And yet, he takes his time calling the police.

Once the police are finally informed, it falls to DCI Jonah Sheens to make sense of the case. Zoe was a popular and caring member of her community, and a motley assortment of displaced youths and strays relied upon her for support. No one in her peculiar circle has a bad thing to say about her, but it seems likely that the solution lies somewhere in the great tangle of secrets that they share. Unless, of course, it lies with Aidan.

A superbly modern addition to the espionage genre, Black 13 eschews the worn out us-vs-them, this-agency-vs-that-agency templates to bring us addictive action and knife-edge thrills that take place in a world without loyalty, a game without rules.

It has all the markings of an explosive blockbuster… in fact, you need only read the blurb to know exactly the sort of exhilarating ride you’re in for. Here it is:

“The world is changing beyond recognition. Radical extremists are rising and seek to enforce their ideology globally. Governments, the military and intelligence agencies are being outmanoeuvred at every step. Borders are breaking down. Those in power are puppets. The old rules are obsolete. To fight this war a new doctrine is needed. In a world where nothing is at it seems, where trust is gone, one man will make the difference. Meet Ex-MI6 agent and man in exile, Scott Pearce. It’s time to burn the espionage rule book. Watch Pearce light the fire.”

If you’re tired of spy thrillers packed with the same enemies and the same quick-approaching world calamities, give Black 13 a go.