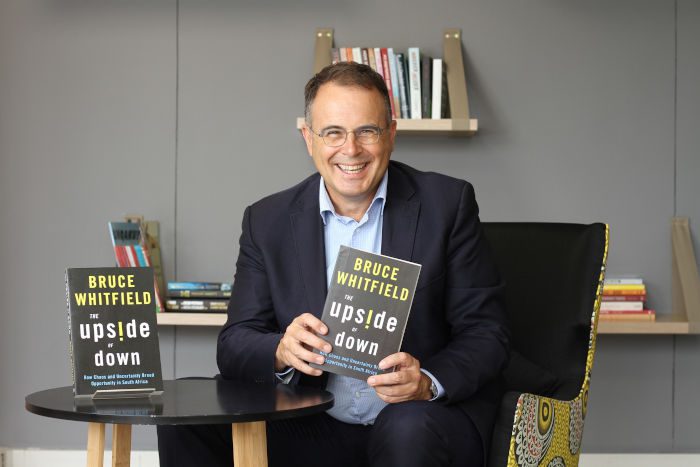 Can chaos and uncertainty breed opportunity? This is a question Bruce Whitfield’s new book answers. Out in April, The Upside of Down tells remarkable stories of remarkable people and paints a picture of a South Africa very few people dare to imagine. Here is a quick Q&A with Bruce Whitfield about his new book.

How did The Upside of Down come to be written?

On 9 December 2015, Jacob Zuma fired his finance minister Nhlanhla Nene. It was the moment that the state-capture agenda became clear. That realization that a government that should have been the custodian of the interests of its people was in fact being used in a deliberate and well-ordered fashion to loot the fiscus drove South Africans into a sense of deep despair. I was on a flight home that night and wrote an 800-word column for ewn.co.za that became the genesis of a series of talks which have been delivered at hundreds of gatherings over the past three years from audiences of one to one thousand as I have analyzed the consequences of state capture and how the resilience and ingenuity of South Africans tackles crisis. It became clear that we spend so much time worrying about the rascals, reprobates and problem causers in our society, whose extra-curricular activities dominate our news agenda, that we don’t pay sufficient attention to the problem solvers. As Nobel prize winning economist Robert Shiller points out in his study of Narrative Economics, the stories we tell that go viral influence economic outcomes. We need to ensure we tell stories of success as well as stories of failure and deceit. That is what got me started.

What opportunities will emerge from COVID-19?

It’s too early to tell, exactly. But there will be enormous opportunities that emerge.  Right now we are all too emotional about the risks associated with a new virus, not only to the health of those nearest and dearest to us, but we are also fearful about the economic consequences of the shutdown of whole economies as governments strive to keep populations apart in an effort to slow and ultimately halt the spread of COVID-19.

What is clear is that lockdowns in response to the health crisis will create enormous problems, particularly in poor countries which already had enough to deal without the added complication of a pandemic. It is those problems that will create new opportunities. It has brought inequality into sharp focus. Not just the fact that societies, particularly South Africa are deeply unfair, but the risk that poses to long term stability.

Millions of people being sent home to cramped and often squalid conditions with no income creates the potential for a powder-keg. This crisis is laying bare the true nature of the structure of society and the fact that if we do not find a way to include more people in the economy, this will be a wasted opportunity.

For years we have been talking about the digital economy and the fourth industrial revolution in abstract terms. This crisis has forced us to change faster than we ever imagined possible. This could change the way we work and live for the long term, change the way we shop, consume media, socialize and travel.

At least for a while.

Do you expect this crisis to have a major impact on political and economic attitudes?

For South Africa, COVID-19 can either be a rallying point to finally and honestly tackle the multiple problems the country faces head on – or become a lost opportunity to begin to address the vast injustices that have shaped society over nearly four centuries. It is up to us as to how we choose to deal with this crisis now that will determine the consequences with which we will have to cope later.

Who is the shrewdest business-person you have ever met?

Shrewd has a negative connotation. It implies dishonesty. An underhandedness. I appreciate the dictionary definition is: “having or showing sharp powers of judgement; astute.” But it has taken on a different meaning in everyday speak. So I am going to use the synonym: “astute” instead.

There is no single one. We have so many who, over many years, have not only spotted opportunity, but have acted on those opportunities and have created great global enterprises. I talk to many of them in the book and tell some of their stories.

Is there a single characteristic they have in common?

Other than being rich? That’s not a characteristic but rather the result of character.

They have several traits in common: a relentless optimism in the future; huge energy; a power to command armies of people to execute on their vision, a desire to improve the world and a laser sharp focus on what they do.

Most are deeply decent human beings, once you gouge through the sometimes-brash exterior.

What’s the single most compelling period on which you have reported?

This is my journalistic recency bias shining through – but what we are going through right now is as exhilarating as it is terrifying. It’s a mix of science, economics and humanity all thrust together into a single story. South Africa’s political transition was equally compelling as the human element of a country in transition was so powerful. It seemed too much to hope for that the country would emerge from the uncertainty of transition in better shape, and it did. It was a story of the triumph of the human spirit over adversity and the importance of leadership in delivering on the hopes of ordinary people that was so powerful. As South Africa moves beyond the lockdown, rebuilding the economy to ensure that the negative financial consequence of fighting the pandemic is not more devastating than the virus itself. That is where leadership is going to matter more than ever.

How much of The Upside of Down is devoted to dispelling the notion that this a particularly bad period in our history?

Recency bias is a terrible thing. Yes, we are living through a really challenging time, of that there is no doubt. But we are hardly asking a generation of young men to go to a foreign land to sacrifice their lives in a fight against a political ideology, we are not cowering in bomb shelters as wave upon wave of enemy aircraft intent on our destruction come in waves to wipe us off the face of the earth. We are being asked to sit and home and occupy ourselves away from our normal activities. It’s frustrating but not by any stretch the most onerous task relative to what our forefathers endured for millenia before us.

We have the advantage of mass communication that enable governments to deliver life-saving messages based on the very best scientific knowledge and the experience of health services globally in the blink of an eye. Science has never been more advanced and better positioned to find a remedy for the health crisis, and the ingenuity of global policymakers to restore growth after this initial crisis will be tested and depending on our response, there is no reason to think that human progress does not continue to make the world an even better place for future generations.

What are the biggest ways that fear can affect business strategies and economic development?

Fear can breed strategic paralysis. The big difference between winners and the rest is that winners gather facts, get the best people on their teams around the table, nowadays on a conference call, and define their strategy, which they then implement relentlessly. They don’t allow themselves to be crippled by indecision. They leave that up to their biggest competitors to worry about. Agility is critical in crisis, as is a focus on a common goal. No-one can make decisions when their minds of overwhelmed with fear. Confront the fear with facts.

Is there one piece of business advice that you try to bear in mind?

“If it’s not Armageddon, you should be building.”

It comes from Adrian Gore who began Discovery in what I believe was South Africa’s darkest hour. 1992. There was deep uncertainty. We were in one of the longest recessionary periods in human memory, but he saw an opportunity to provide a new kind of health insurance in a country he anticipated would see a boom in private hospital demand. Even as Chris Hani was shot in his driveway in Boksburg he persisted on the basis that our worst fears seldom come to pass, and if that is the case, then we should focus on a more optimistic future than the present we are currently experiencing.

Poverty. You cannot be wealthy in South Africa and sleep well at night knowing what you do about the chasm of inequality where people are trapped in a cycle of poverty from which they cannot escape. How do we get more people into the formal economy, earning, paying tax, improving their and their family’s lives – it’s our biggest single challenge and biggest opportunity if we can solve it.

What’s the most widespread misconception of South Africa?

What do you most hope people will take away from reading The Upside of Down?

South Africa has problems. Sure. Big ones. But that is where the opportunity lies for those who are nimble, smart and acute problem solvers.

Dr Seuss: Oh! The places you will go.

Everyone considering a start up needs to read this book first. Then mine.