Q&A with Dominique Valente, Author of Starfell: Willow Moss and the Lost Day 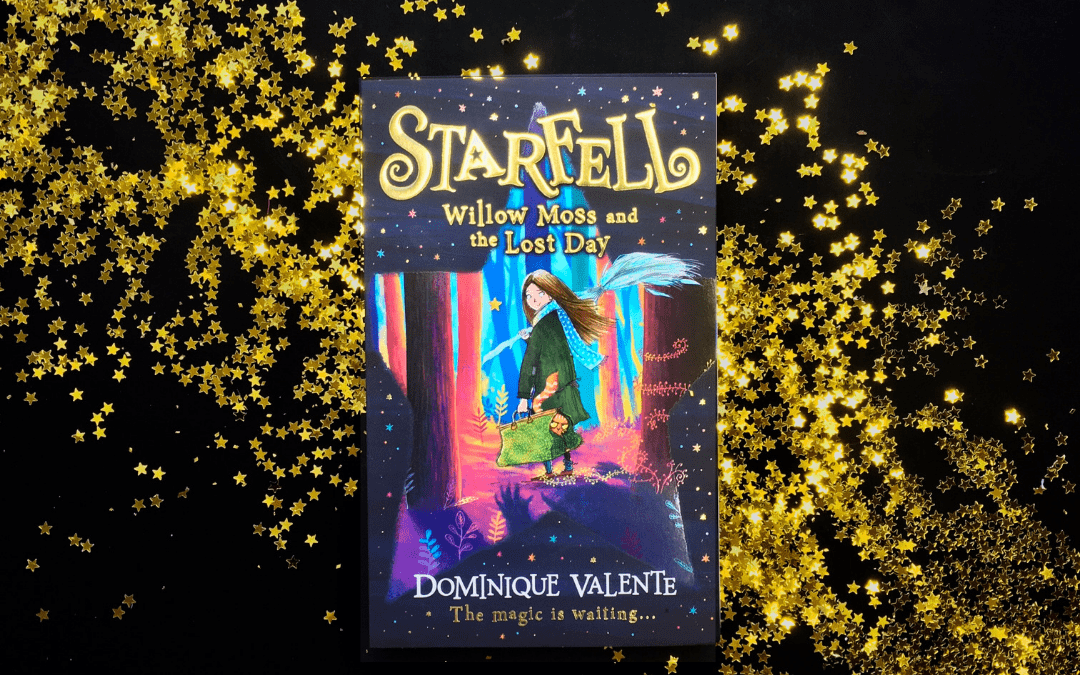 Starfell: Willow Moss and the Lost Day is the first in a fantastic new series of magical middle-grade novels ideal for fans of Cressida Cowell.

Willow Moss, the youngest and least powerful sister in a family of witches, has a magical ability for finding lost things – like keys, or socks, or wooden teeth. Her magic might be useful, but it’s not exactly exciting . . . Until, that is, the most powerful witch in the whole of Starfell turns up at her door needing Willow’s help.

Willow Moss’ creator, Dominque Valente answered some questions we had for her about her new book and herself, and the results are lovely. Here is the Q&A:

1) How would you describe the process of writing Starfell: Willow Moss and the Lost Day?

An adventure and a labour of love. It took about eight years from start to finished product. The initial idea of a young witch with the worst magical power in her family popped into my head one day while I was driving home from work, and I wrote the first chapter the next day. It would take about three years though for the plot to arrive – the idea of missing day, which happened by accident as along with finding missing spectacles and wooden teeth it appeared due to a stray comma that she had found last Tuesday. I then redrafted it several times, after getting several agent rejections. Third time lucky was the charm though!

2) Willow is portrayed as the least powerful of her sisters, though she has her own special gifts. Is this more about creating an underdog story, or challenging what we think of as magic?

It is both – she is an underdog, but she also, as many of us (myself included) see ourselves as less than others at times. Willow’s journey is about embracing her own unique power, which while not overtly powerful is incredibly useful, in fact more so than say her sisters more flashier magic – the message is that it doesn’t take big magic to save the world, just someone willing to try. I really believe this (sappy, I know, grin!)

3) Somewhat disregarded by much of her family, Willow’s challenge seems to be to believe in what she can offer, and in her own abilities. Many young readers will relate to that. Is it something you’ve experienced yourself?

Definitely, it’s enormously autobiographical in the sense. I have two gorgeous, popular and sporty older brothers, and my only claim to fame growing up was that I had read the most books in my library. Added to my introverted, somewhat nerdy side is the fact that I also have a disability, I was born without a left forearm. Being the only person in your school – town even – with something like this growing up was hard. But it has taught me so much, and tested my courage in so many ways. It’s made being brave a habit, which was a pretty awesome gift in the end, though it’s taken me a long time to see it that way.

4) Do you have a favourite witch or wizard from children’s fiction, apart from Willow, of course, and did you draw inspiration from any other magical worlds in particular?

So many. I adore Gandalf from Lord of the Rings and Granny Weatherwax from Terry Pratchett’s Discworld, also Tiffany Aching from the Wee Free Men. Harry Potter, of course. Mary Poppins, and her strict no nonsense. In terms of magical worlds, I definitely drew on these, as well as Enid Blyton’s Faraway Tree, which I loved growing up, and The Never Ending Story.

5) I’ve read that the main plot came to you sort of by happenstance. Can you tell us a little about that?

Yes, I made a mistake with a list comma, and so it seemed that Tuesday had gone missing along with other everyday items, my best-friend who kindly read the first few chapters asked if that was what I intended, and at first I was like, ‘Of course not!’ Only to sit up three years later while on holiday in France attempting to have a nap and realise that THAT could be the entire plot for the first book. It took a long time to work out what a missing day might mean, but I really enjoyed exploring it as I love the idea that something seemingly ordinary, like a single day, can actually be quite extraordinary when you really stop to think about it.

6) You’ve also said that you prefer witches and hags to princesses in fairy tales. I certainly do too. Do you think there is a necessity to pull away from the princess archetype in children’s media?

They have always seemed far more interesting to me, witches and hags. They’re often self-made, and independent, and they live by their own rules in cosy cottages, and take no nonsense – which as people pleaser appeals to me in a kind of ‘I wish’ way. I’m sort of a hermit and my life long goal is to have my own tree / hobbit house in the woods. The idea of Willow Moss appeared as I was thinking that so many fantasy stories and stories for young people in general feature the idea of a ‘special, chosen one’ – like say a prince or princess, or someone who will only be special once they marry a prince or princess. It’s just not something I could ever relate to. When I think of say many Disney films, I think a hundred years ago this was the only way to miraculously change our circumstances – through marriage – but thankfully we’ve come a long way now, so it would be great to see more stories of people pulling themselves up through their own smarts and skills rather than luck of birth or a well-off partner.

7) Willow’s main support comes from her grandmother, Granny Floss. Was she inspired by anyone in particular?

She was somewhat inspired by my own grandmother minus the craziness, though she is a bit quirky to be fair. She moved next door when I was a bit older, and after my grandfather passed away we spent a lot of time together. She has this wonderful dry sense of humour and I never felt like she was the typical Granny – she was a bit off-beat and fun. She also really made me feel seen, it’s through her that I really got my love of reading as in a house full of boy siblings, not to mention being the last child – getting things that were for just girls or being first for anything was a rarity, so when she once turned up with an entire box of books just for me it felt rather special. I made it my personal challenge to read the whole box, which I did! Did I mention I am a nerd?! Grin.

8) What aspect of Willow Moss and The Lost Day did you enjoy writing the most? Were there any parts you found especially difficult?

I’ve loved meeting each new character. I think as it took so long to write, I really flt like I got to know each one rather deeply. So chapter three where we meet Oswin is a personal favourite, and also Feathering, the dragon. Most of it was a joy to write though as I really did just write the sort of story I wanted to read. The most difficult part was learning that less is more, which took a long time! I kept overcomplicating the story, and knowing that I was complicating it but not quite sure how to fix that. The first draft of the book was actually two separate stories, once I figured that out it all fell into place a lot better.

9) Did you know, from the get go, for which age group you were writing, or did that come as a natural extension of the story?

I always knew it was going to be middle-grade as I really love that genre, but what I didn’t realise was that it would appeal a lot to the younger spectrum of that bracket (eight to ten) too. My agent and publishers said that most middle-grade is positioned for the top end of the bracket (so eleven/ twelve) and this can leave some kids entering that genre feeling stranded as the books are bigger/or less accessible. While I honestly wrote this as a book that can be enjoyed for anyone from eight to eighty-eight, I’m thrilled that the younger crowd don’t feel put off.

10) What can we expect Willow Moss to get up to next? Are the next Starfell books underway?

More magic and mystery, new friends, and a rather perilous journey … The second book has been written and is now been wrangled into shape as we speak by my fabulous editors, and that should be out next year April.

11) Do you have any favourite authors or books at the moment?

12) Finally, what do you most hope that readers will take away from reading Willow Moss and the Lost Day?

There’s magic in being yourself and you don’t have to be the most powerful person in the room to make a difference.