Of course, It Chapter Two is out this week, which is madly exciting because, well, it’s absolutely bound to be thrilling, but also because Stephen King adaptations always prompt such vigorous and fascinating comparison – as do most film adaptations. Often these comparisons end up mired in passionate wailings and denouncements of inferior formats and visions but sometimes, every now and then, a film adaptation surpasses its source material. Either way, it is almost always true that a film version brings the kind of attention to its author that is otherwise impossible to come by. Not just that, but having both seen the film and read the book affords you a special chance to really bury yourself in the work, to gain new perspectives and to fully consider what goes into the telling of a story – and you also get to wield a certain nerdy authority over your friends… which is nice.

Anyway, it turns out that the rest of this year will be ushering in some properly exciting book adaptions, and I thought it would be fun to have a look at what we can expect. So, here’s a selection of exciting book-to-film efforts that will be hitting screens soon. I’ll be focusing on the books, obviously, but do look up the films for information on directors and casts – many big names involved. If you’re sharpish, you can read the book before the movie hits.

1. The Goldfinch by Donna Tartt

The Goldfinch is an extraordinary, heart-breaking, complex and rich novel that begins with the devastating death of a young teenager’s mother, and an innocent, but ultimately all-encompassing, theft. It’s a gloriously descent into the dual worlds of the rich, sophisticated and knowledgeable and the worn-out, desperate and isolated, driven by some of the most memorable characters you’ll ever encounter in fiction. With art, love, obsession and alienation at its centre, The Goldfinch is a staggeringly accomplished novel, a story that penetrates the soul and entices the philosopher in us all.

Yes, King gets two this year. Not that anyone’s complaining. This one is especially intriguing because it’s the sequel to probably the most controversial and infinitely pondered adaptation of all time, Kubrick’s The Shining. Doctor Sleep, which came out a full thirty-six years after its predecessor, follows the now adult – and still very much traumatised – Danny Torrance as his psychic abilities re-emerge after years of being dulled by drink. He encounters a girl, Abra Stone, whose significant powers match his own, and forms an unwitting bond with her. The two encounter a quasi-immortal cult who feed on the energy produced when children with the “shining” are slowly tortured to death. Danny must beat back the demons that still haunt him to plunge into a gory, thrilling, battle for this Abra’s soul, and the survival of all similarly gifted individuals. Drenched in the despair, violence and dread that defined the first book, Doctor Sleep is a powerful successor that promises to be just as riveting on screen.

3. The Good Liar by Nicolas Searle

Here’s a fairly recent debut you may have missed – a brilliant tale of lifelong deception with shades of Patricia Highsmith’s Tom Ripley series. Roy has done it plenty of times before. A seasoned conman, he’s about to swindle a new mark and is sure of success. He soon seduces his way into the life of a wealthy, seemingly unaware, widow and prepares to make off with everything she has. But Roy is old now, and we can’t help but wonder how he has survived so a long a life of lies, the prices he might have paid and whether he really can carry on. Bit by bit the book reveals Roy’s story, exploring who he really is through blurred lines, back to front storytelling and cleverly constructed revelations. It’s a terrific feat of character development: suspenseful, intriguing and apt to mess with your head. I will say that the film stars Ian McKellen and Helen Mirren… because I just can’t help it.

4. Daniel Isn’t Real (In This Way I Was Saved) by Brian DeLeeuw

This is the story of a profound friendship. Daniel and Luke meet in a playground in New York. They instantly hit it off, inventing elaborate games between themselves, and soon Luke and his mother Claire are welcoming Daniel into their home and their lives. With his parents’ divorce, Luke takes great solace in his constant friend. As his mother succumbs to depression and frailty Luke relies ever more heavily upon Daniel whose adventurous and wise personality offers essential refuge. But something is definitely up with Daniel. As the two grow into young men, Daniel’s affection gives way to intense jealousy and his friendship is replaced by malicious manipulation. Soon, Luke is battling Daniel for control of his own life – and it is far from clear who will win. It’s an insidious and provocative tale of love and madness – tense, chilling and gleefully twisted.

5. The Irishman (I Heard You Paint Houses) by Charles Brandt

The case of Jimmy Hoffa is a famous and compelling one. Hoffa was a labour union leader who vanished in 1975 after his assassination was ordered. To “paint a house” is to kill a man and this is the true story of notorious hit man Frank Sheeran – who confessed to more than 25 murders committed for the Mob. The relationship began as a business arrangement. Sheeran’s killing career began with him carrying out the bidding of Hoffa and ended with him dispatching his old friend at the behest of legendary crime boss Russel Bufalino. Brandt’s account of these infamous characters and the web of murders that entwined them is a classic of true crime: a page-turner of rare insight that illuminates a truly important and harrowing period in America’s history of mob crime. It’s an incomparable portrait of a hitman – his life, affiliations and actions – that is utterly compelling in its depiction of “taking care of business”, whether or not you are familiar with the history. If it sounds like a Martin Scorcese film, that’s because it is. And if it sounds like it should star Al Pacino, Robert DeNiro and Joe Pesci… good, because it does.

In addition to these five, which I reckon ought to be the most exciting, there are also upcoming adaptations of Charles Dickens’ David Copperfield (filmed as The Personal History of David Copperfield), Louisa May Alcott’s Little Women, YA favourite All The Bright Places by Jennifer Niven and A Million Little Pieces the hugely controversial and questionable book by James Frey.

Exciting stuff! So, if you have to spend the rest of your year between the cinema and the bookshelf, it would be time well spent, no doubt. Happy Reading and Watching! 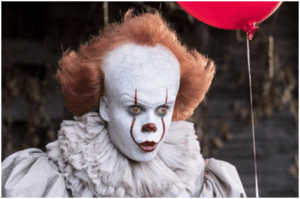